Berkshire Hathaway and The Annual Meeting

Over the weekend, Warren Buffett and Charlie Munger sat down for Berkshire Hathaway’s annual shareholder meeting. While the annual discussions are always chock full of insight regarding current issues in financial markets, below we wanted to show how Berkshire Hathaway’s (BRK.A) class A shares have performed leading up to and after these meetings. We use class A shares rather than the more affordable and liquid class B shares due to their more extensive history, but the two typically trade similarly with a correlation coefficient of their daily moves at 0.95.

This year, the stock heads into the annual meeting with a 19.62% year-to-date gain. That ranks as the third-best year since 1994 with the only larger YTD gains heading into the meeting being a 21.52% gain in 2013 and a 50.65% gain in 1998. On average, the first trading day after the meeting (or the day it took place in the case of the years before 2000 when the meeting was held on a Monday; highlighted in gray below) has typically seen the stock move higher with an average gain of 0.3%. Returns through the end of the week that the meeting is held also hold a positive bias with a 40 bps average gain and positive returns 59% of the time.

One month after the meeting, though, more often than not Berkshire has actually traded lower. In fact, outside of 2020, 2017, and 2013, every post-GFC year has seen BRK.A fall one month out with a median decline of 19 bps. Fortunately, those losses are usually recovered by 3 months later, and it has usually closed out the year in the green better than three-quarters of the time. Click here to view Bespoke’s premium membership options for our best research available. 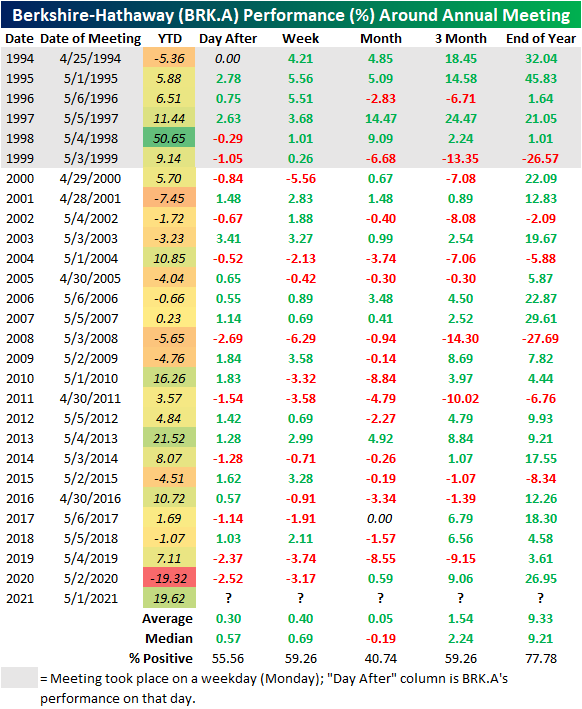