Yesterday, the news of the day was Alphabet’s (GOOG) massive gain on earnings that added $132 billion in market cap.  The gain pushed Alphabet closer to the $2 trillion market cap club, which currently has two other members: Apple (AAPL) and Microsoft (MSFT).

Today, another mega cap Tech stock is in the spotlight for the opposite reason.  After reporting weak quarterly results and forward guidance, Meta Platforms (FB) has shed over $225 billion in market cap.  Given that is the stock’s worst single-day drop in its history as a public company, it is also the largest single-day drop in its history in terms of market cap.  As a result of the decline, Berkshire Hathaway (BRK/B) has unseated FB for the S&P 500’s sixth-largest stock.  At the moment, Berkshire’s market cap of ~$710 billion is more than $20 billion higher than Facebook’s (FB) $687 billion market cap.

Since the end of last year, BRK/B has actually now risen two spots in the rank of S&P 500’s largest stocks, eclipsing both Facebook (FB) and NVIDIA (NVDA).  As for some other notables, Exxon Mobil (XOM) and Coca-Cola (KO) have made huge jumps in the rankings this year, rising 10 and 9 spots, respectively, to break back into the top 20 list.  Looking at the change in rankings over the past couple of years, NVIDIA (NVDA) has also notably risen through the ranks at a very rapid pace, jumping 31 spots since the end of 2019. While Tesla (TSLA) was not a part of the S&P 500 at the end of 2019, taking where it would have ranked in the index back then, its 79-spot jump is even more impressive.  Click here to view Bespoke’s premium membership options. 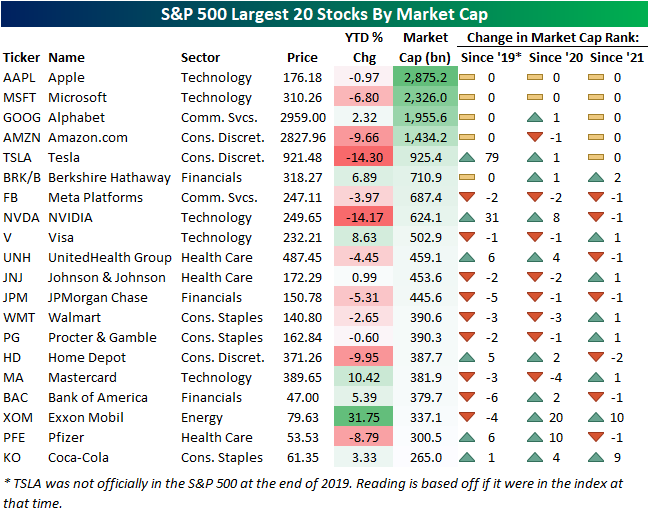