Bearish Sentiment Back Above 40%

As the S&P 500 continued to decline over the past week, survey results from the American Association of Individual Investors have shown investor sentiment has taken a more negative tone. 28.1% of respondents this week reported as bullish versus 29.9% last week.  While lower, that is still several percentage points above the recent low of 22.4% from a couple of weeks ago. 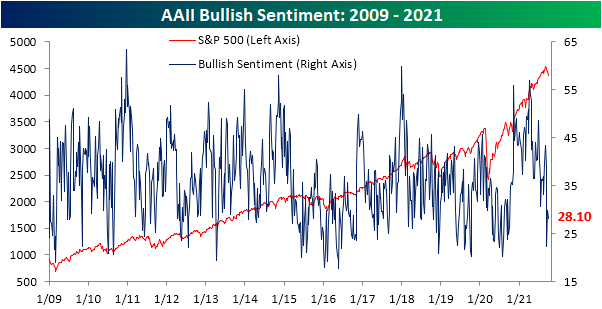 Bearish sentiment picked up the bulk of those losses to bullish sentiment as 40.7% reported pessimistic sentiment this week.  That is the highest reading in exactly a year. With bearish sentiment having risen by 13.5 percentage points since the low of 27.2% in the week of September 9th, it is now a full standard deviation above its historical average of 30.55%. 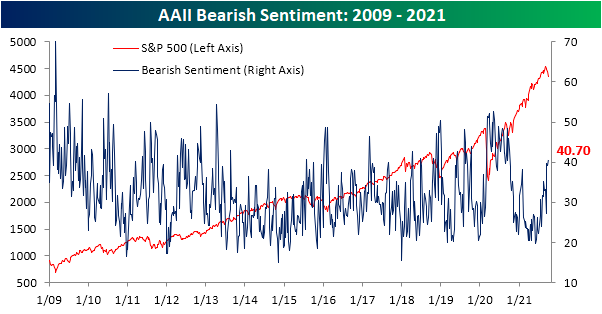 Even though bearish sentiment came in at a new high, the bull-bear spread was only slightly lower at -12.6.  That is still above the low of -16.9 from two weeks ago. 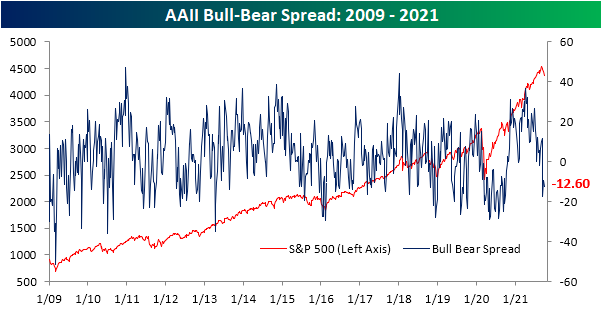 Bearish sentiment did not pick up all of the losses to bullish sentiment either. Neutral sentiment was also slightly higher this week gaining 0.2 percentage points. 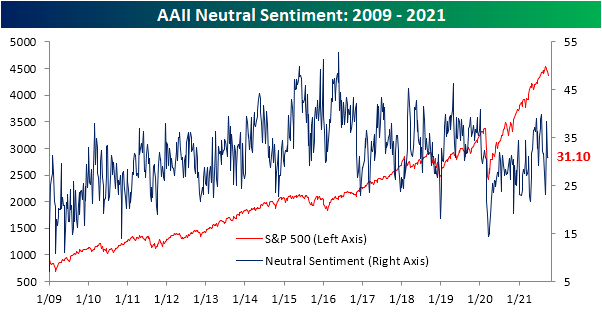 Other readings on sentiment are also echoing the decline in optimism.  One other sentiment indicator, the National Association of Active Investment Mangers’ Exposure Index, has also seen a significant drop this week. This index shows how exposed managers are to equities with a reading of 200 being the max and meaning respondents are leveraged long whereas -200 would be leveraged short.  A reading of +100 (-100) would indicate managers are full long (short), and a reading of zero would indicate they are market neutral.  The index has fallen in back-to-back weeks now with this week seeing a 22.68 point drop to the lowest level since May.  That week over week change also ranks in the bottom 5% of weekly moves going back to the start of the data in 2006, although there have been a handful of similar if not larger drops in the past year like a 26.98 point decline in mid-August and a 40.93 point drop back in May. Now at 55.02, the index indicates managers have stepped back and are far less exposed to equities than they have been for most of the past year. Click here to view Bespoke’s premium membership options. 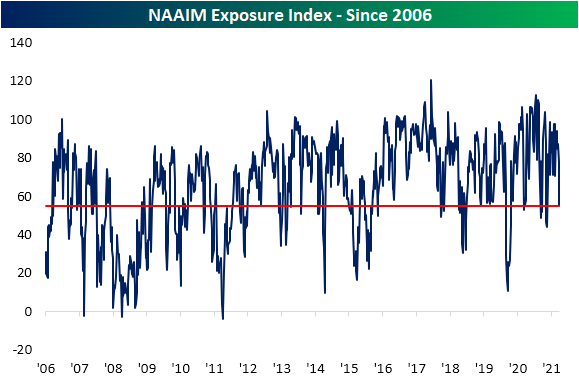