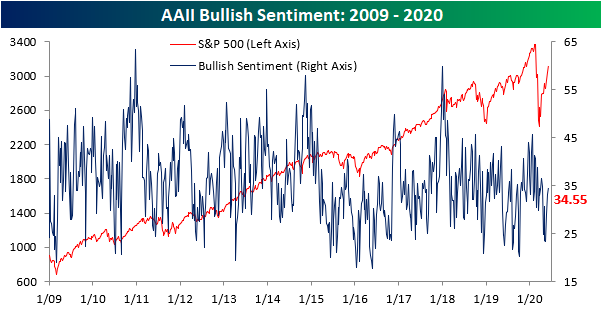 Meanwhile, bearish sentiment has continued to fall from its elevated levels.  Bearish sentiment fell back below 40% to 38.87% this week.  That is the first time that bearish sentiment has been below 40% in 12 weeks. In the history of the AAII survey, there were only two other streaks above 40% that ran that long if not longer: one ending in December of 1990 at 19 weeks and another ending in March of 2008 at 14 weeks.  S&P 500 performance following both of those past occurrences differed greatly with the index higher by 17% six months later in 1990, but down over 10% in 2008.

Additionally, this was the first time that bearish sentiment has been within one standard deviation of its historical average of 30.48% in 12 weeks. There have only been three other similar stretches that have gone on at least 12 weeks. Two of those were during the previously mentioned periods in 1990 and 2008 lasting for 18 and 14 weeks, respectively.  Additionally, there was a 14-week long stretch that ended in August of 2006.  In terms of performance of the S&P 500 following that period, it more closely resembled 1990 than 2008 with the index higher by 12.18% six months after the streak came to a close. 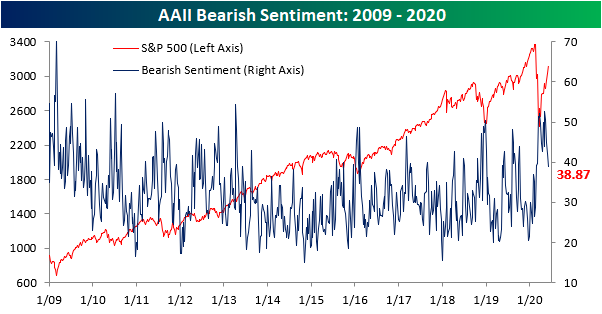 With bearish sentiment continuing to move to more historically normal levels and bullish sentiment clawing higher, the bull-bear spread still favors bears at -4.32, but by the narrowest margin since the first week of March when it stood at -0.9. 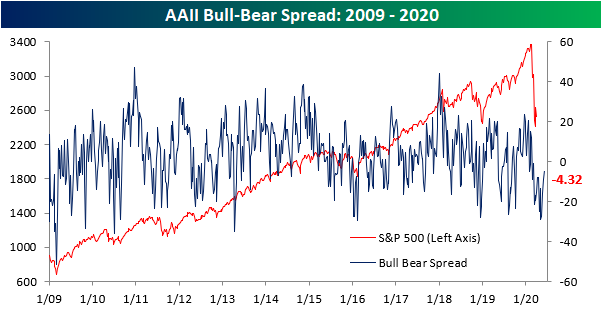 Meanwhile, neutral sentiment also continues to move back to more normal levels. Historically, neutral sentiment has averaged a reading of 31.5% but is now at 26.58%. That is the highest level for neutral sentiment and the closest to its historical average since the final week of February.  Click here to view Bespoke’s premium membership options for our best research available. 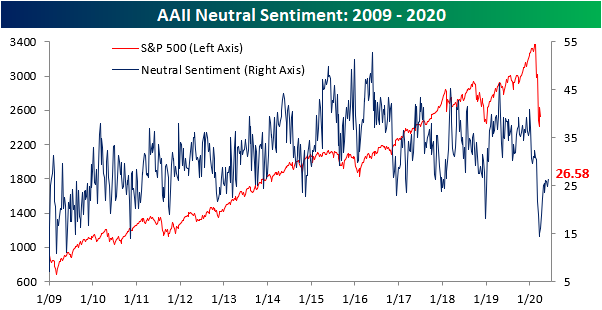