On Friday, we released the first taste of our 2020 outlook report with the Market Cycles and Economic Cycles sections.  As the S&P 500 closed at another record high in November (currently just under a quarter of a percent away from this high), the bull market remains fully intact as the picture looks very different from the time of our last end-of-year report when the bull market was on the verge of coming to an end. We define a bull market as any period in which the S&P 500 rallies 20% or more (on a closing basis) without a 20% or larger drawdown. Bear markets, on the other hand, are a 20% decline from a high without a 20% rally in between.

Even though we are far from a bear market (S&P 500 would need to fall to 2522.9 from the November 27th high to meet the criteria), in the Market Cycles section, in addition to gauging where in the cycle we currently stand, we also highlighted equity market performance during bear markets.  Of the thirteen post-WWII bear markets, the median decline was closer to 30% (median: -28.47%).  The least severe bear market was a 20.6% decline from June 1948 to June 1949, while the most severe was during the credit crisis when the S&P 500 fell close to 52%! 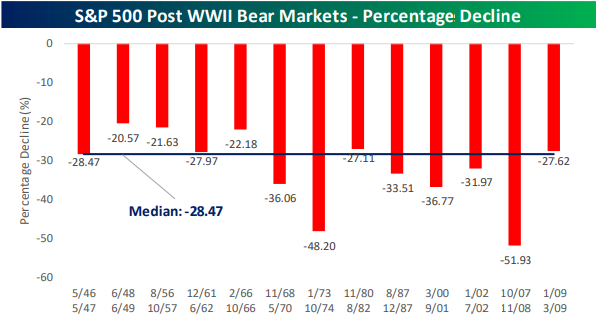 There have been a number of bear markets that have been relatively short (200 days or less), but most tend to be drawn out lasting over a year. The shortest bear market was just 62 days from January 2009 through March 2009, but that was basically just an extension of the prior one from the Credit Crisis.  The longest bear market in the post-WWII period was 630 days beginning in January 1973 and ending in October 1974.  Sign up using our 2020 Annual Outlook Special to gain access to the entire section on Market Cycles and the full publication to be released by year end. 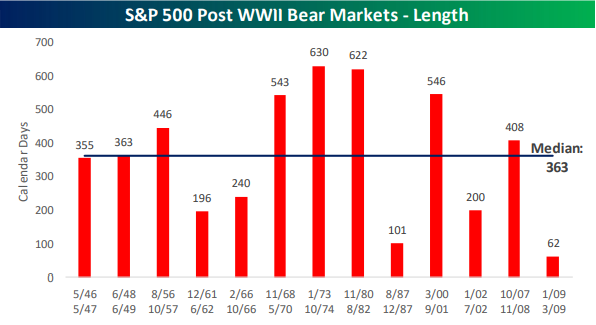