Battle of the Social Media Misfits

While both companies were touted by some as the next Facebook (FB) at the time of their IPOs, Twitter (TWTR) and Snap (SNAP) have clearly not lived up to their hype.  Years after their respective IPOs, both companies trade well below levels they traded at immediately after they started trading.  While neither company has been able to hold a candle to FB, for the last several years TWTR has mostly been considered the least bad of the two companies given its utility for a source of breaking news.

So far in 2020, both stocks have held up relatively well, but the tide has turned in SNAP’s favor.  Looking at TWTR first, after a sharp drop during the COVID Crash, the stock has regained the bulk of its losses trading in a steady uptrend channel off the lows.  While the stock has been unable to retake its February highs, it is up in the high single-digit percentage range on a YTD basis. 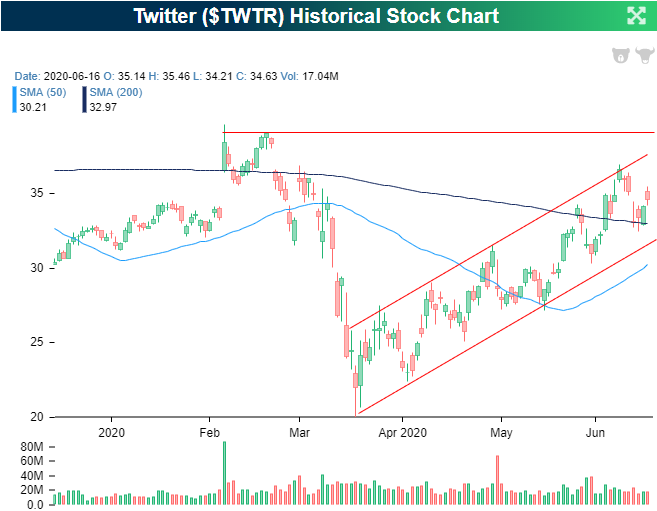 Turning to SNAP, if you look quickly, the chart looks very similar to TWTR.  Looking a little closer, though, the stock has seen a steeper ascent off the March lows, and as a result, it has also managed to make new YTD highs in the last couple of weeks.  SNAP first overtook its high from January on June 2nd, and while it pulled back with the overall market last week, it has rebounded to new highs in the last two days.  Following this move, SNAP is 9% above its January high and up more than 32% YTD. 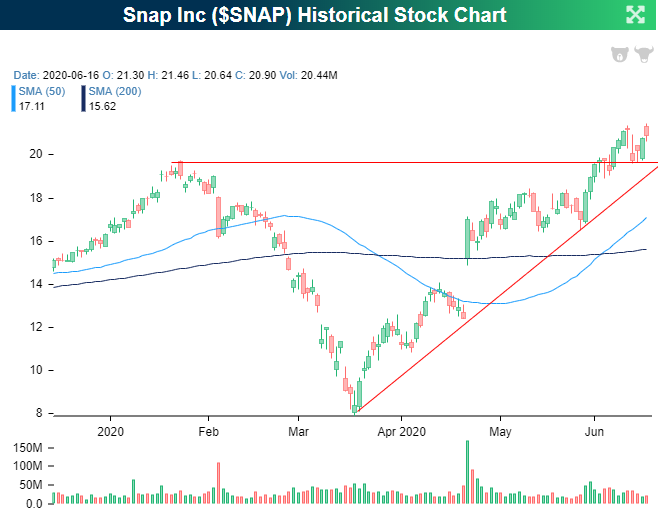 With SNAP’s recent outperformance, it also recently overtook TWTR in terms of market cap, and the gap has been widening ever since. In fact, with a current spread of $3.8 billion between the two stocks, the gap hasn’t been wider (in SNAP’s favor) since February 2018.  Only time will tell whether or not this trend will continue, but analysts are currently expecting a lot stronger growth from SNAP than they are for TWTR.  For this year and the next two, SNAP’s revenues are expected to rise by 23%, 38%, and 30%, respectively.  Conversely, expected sales growth for TWTR in the same three years is expected to be much weaker at -5%, +22%, and +14%, respectively.  For anyone with kids or teenagers, that kind of forecast makes sense as the first app they want when they get a phone is Snap, while the phrase, “Can I get a Twitter account?” is about as common as “Can I go to bed early tonight?”  Click here to view Bespoke’s premium membership options for our best research available. 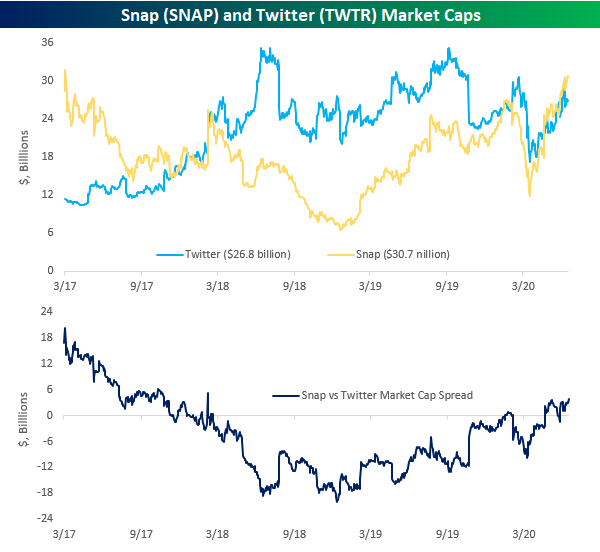