Banks – On To The Next Test

It has been a pretty monumental two weeks for the KBW Bank index.  Since the close on 10/8, the index has rallied just under 9% as earnings reports from some of the largest US banks received a warm welcome from Wall Street.  The index is now once again testing the top-end of its range, one which it has unsuccessfully tested multiple times in the last year.  If you think the repeated tests of 3,000 for the S&P 500 over the last 18 months have been dramatic, the current go around with 103 for the KBW Bank Index has been the sixth such test in the last year!  We would also note that prior to last year’s fourth quarter downturn, the same level that has been acting as resistance for the KBW Bank index was previously providing support.

In the case of each prior failed break above 103 for the KBW Bank index, sell-offs of at least 5% (and usually 10%+) followed, but one thing the index has going for it even if the sixth time isn’t the charm is that just yesterday it broke above its downtrend that has been in place since early 2018.  The group has passed one test at least!  From here, if we do see a pullback, that former downtrend line should provide support. 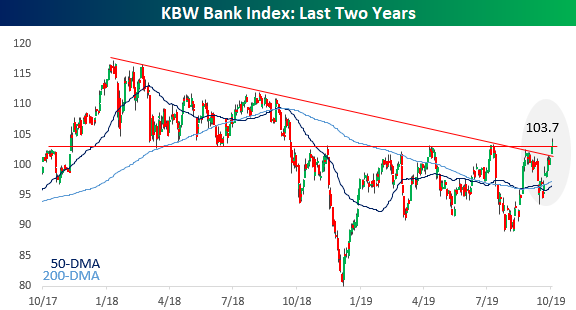 Turning to the KBW Index’s individual components, the table below lists each of the 24 stocks in the index along with how each one has performed since the index’s recent low on 10/8 and on a YTD basis (sorted by performance since 10/8).  In the slightly more than two weeks since the index’s short-term low, every stock in the index is up and up by at least 4%.  That’s a pretty broad rally!

Leading the way to the upside, State Street (STT) has rallied nearly 20%, while First Republic (FRC), Northern Trust (NTRS), and Bank of America (BAC) have jumped more than 13%.  In the case of STT, the rally of the last two-weeks has also moved the stock into the green on a YTD basis.  Start a two-week free trial to Bespoke Premium to sample our most actionable investment research and receive access to all of our interactive tools.  If you use this checkout link, you’ll receive a 10% discount on an annual membership if you stick with it past your trial period. 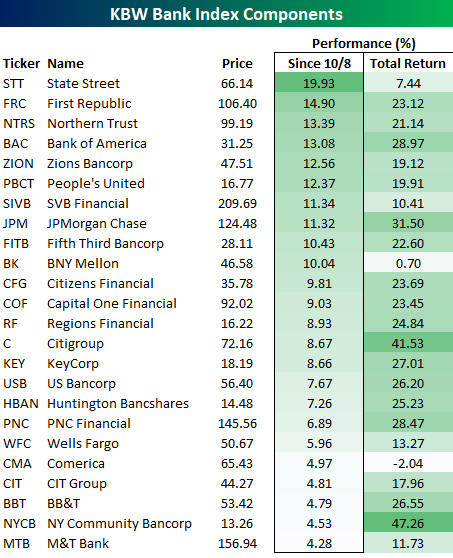