While Financials are the best performing sector so far in today’s session, leading into today it was the worst-performing sector over the past week thanks in large part to a 3.7% decline on Tuesday; the sector’s worst single day since June 2020. Looking more specifically at bank stocks, using the SPDR S&P Regional Banking ETF (KRE) as a proxy, yesterday saw an even more dramatic decline of 5.47% marking the largest decline since November 2020. That drop also ranks in the bottom 1% of all daily changes on record since the ETF began trading in 2006.  The over 3.5% rebound today, meanwhile, ranks in the top 5% of all days on record as yesterday’s decline was not quite enough to drop the industry below its 200-DMA; a support level that has now held multiple times in the past year. 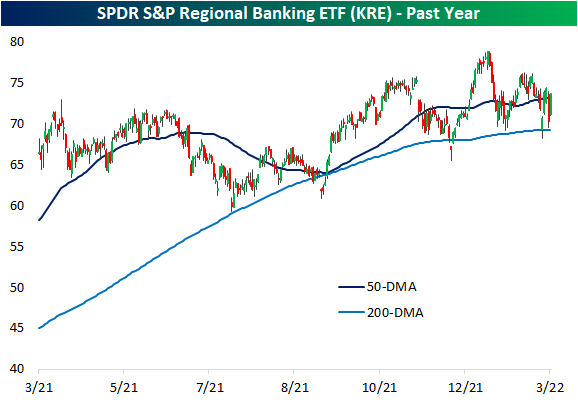 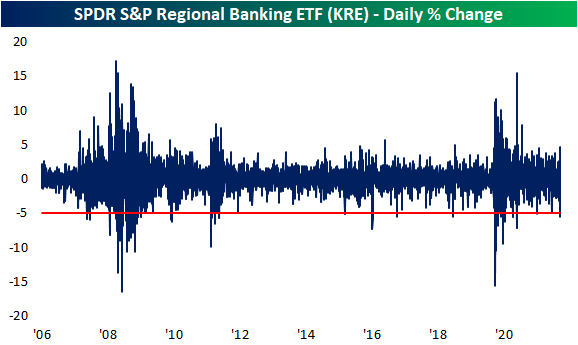 As previously mentioned, it is rare for KRE to fall over 5% in a single day. Excluding yesterday, there were 68 other times this happened but only a dozen of those occurred with at least 3 months between the prior instance.  In the table below, we show the performance of KRE after each of those periods.

While it is far from the case today, typically, the next day has often seen KRE fall further after a 5% drop.  Instead, today it is seeing the second-best next-day performance of these instances.  As for where things go from here though, returns have been weaker than the norm one week and one month following these past occurrences. KRE has then tended to outperform all other periods three, six, and twelve months out. Click here to view Bespoke’s premium membership options. 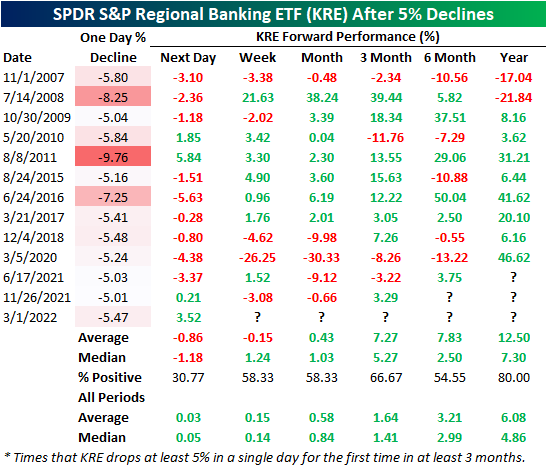