Bad Breadth From the Empire Fed

The first of the regional Fed manufacturing indices for the month of August was released this morning in the form of the Empire State Manufacturing Survey. The headline number reversed lower sequentially for the first time after three straight months of large gains off of the April record low.  The index fell 13.5 points—the nineteenth largest of any month on record—to 3.7.  That indicates the region’s manufacturing sector still expanded for a second straight month in August, but that was at a slower pace than July. Meanwhile, outlook for six months in the future has continued to decline from the June multi-year high.  The future expectations index deteriorated for a second consecutive month with that index declining MoM by 4.1 points to 34.3. Outside the previous two months, that is still the highest level of the index since June of 2018.

Although overall activity still rose in August, the deceleration was notable with the MoM decline in the bottom decile of all monthly changes while breadth was weak. Of the 10 individual components, only three rose in August. Those were the indices for prices paid and received and the number of employees. Breadth was even weaker for the indices for future expectations as not a single one rose in August. In other words, although business concretely improved in August, it was at a slower pace than July while businesses are also less optimistic than they were one month ago. 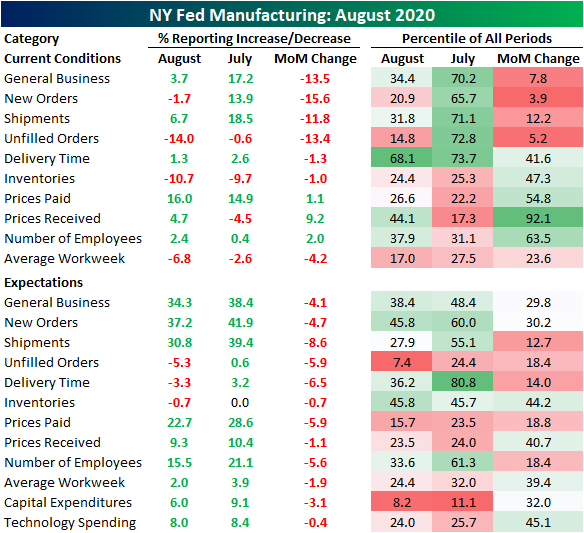 The index which experienced the largest pullback was for New Orders which fell by 15.6 points from an expansionary reading of 13.9 to a contractionary reading of -1.7.  Outside of the massive drops in March and April as well as a 17.9 point decline last June, you would have to go back to 2010 to find another larger drop in New Orders. The index for Shipments likewise experienced a significant decline falling from 18.5 to 6.7, but that was only in the 12th percentile of all months (compared to the 3rd percentile for New Orders) and that still leaves that index in expansionary territory. Overall, these readings showed slowed demand in August.

Unlike just about every other category of the report, the indices for unfilled orders and inventories have still yet to show an expansionary reading in the COVID era. This month, both are indicating businesses are continuing to fulfill existing orders and work off the inventory spike from February.  For unfilled orders, this month’s 13.4 point decline was in the bottom 5% of monthly moves but did not bring it to any new recent low. Meanwhile, the index for inventories fell to 10.7 which is just short of a multi-year low, slightly above the July 2019 level of 10.9. 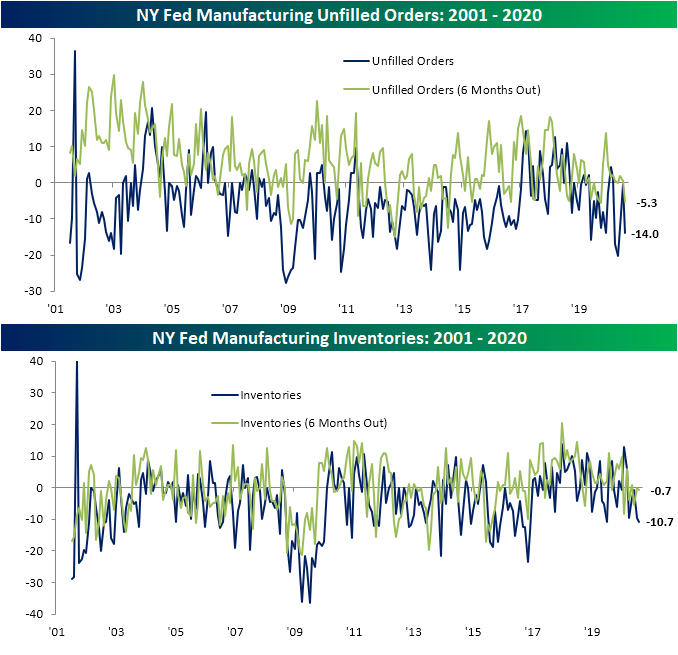 In addition to prices (both received and paid), the only other current conditions index in this month’s report to rise was that for the number of employees.  That index rose 2 points to 2.4. That is the first back to back expansionary readings since January and February of this year. Although businesses are increasing hiring, work hours continue to fall. The index for average workweek remains in contraction as it has for the prior six months and expectations have also continued to deteriorate. Click here to view Bespoke’s premium membership options for our best research available. 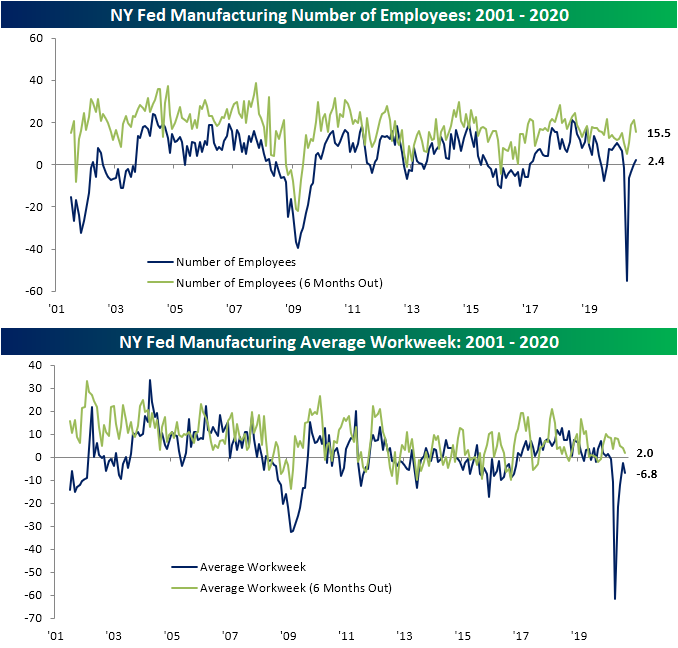