In terms of cumulative returns, the Technology sector is up 210% since the last trading day of 2018, whereas in 1999 it was up 317% in a two-year span.  What’s also interesting to note about the last 31 years of returns for the Technology sector is how it has only experienced five down years, while the S&P 500 has been down in ten different years during that span.  Furthermore, since 2009 there has only been one down year and the decline was a paltry 1.6%.  Not a bad 12-year run!

Given that the sector has more than doubled in the last two years, there have been some big individual winners.  Topping the list with a gain of just under 400% is Advanced Micro Devices (AMD).  On the last day of 2018, AMD traded hands for under $20 per share.  Today’s it’s over $90.  AMD has a lead of more than 100 percentage points over the next closest stock – NVIDIA (NVDA) – which is up 288%.  Interestingly, there aren’t a lot of major outliers to the upside compared to the sector’s 210% gain, but that’s because Apple (AAPL), the sector’s largest stock, has paced the sector’s gains by rallying more than 240%.

On the downside, just four stocks in the Technology sector have declined in the last two years.  The worst of these has been DXC Technology (DXC) which has lost more than half of its value, while Juniper (JNPR) and HP Enterprise (HPE) are down between 10% and 20%.  Lastly, FLIR Systems (FLIR) has declined less than 2%, so depending on how it acts in the next two days, it could move into positive territory just as Intel (INTC) did yesterday after Third Point bailed it out and moved the stock barely into positive territory for the last two years. 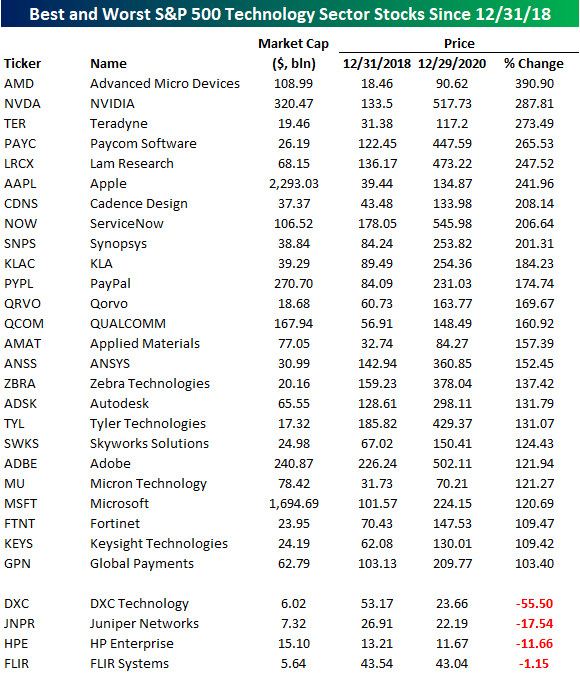