Avis (CAR) Takes The Wheel Of The Transports

In an earlier post, we highlighted the relative performance of one of the key industries used to gauge broader economy/market health: the semis.  As for another—perhaps more old school—cohort of stocks considered to be a leading group acting as a barometer for the broader economy, the Dow Transports have seen some interesting moves this week.  In the chart below, we show the relative strength line of the Dow Transports versus the S&P 500 over the past five years.  On a relative basis, the group has generally underperformed over the past few years, but more recently the relative strength line has been headed higher. Yesterday alone, though, it received a massive boost. 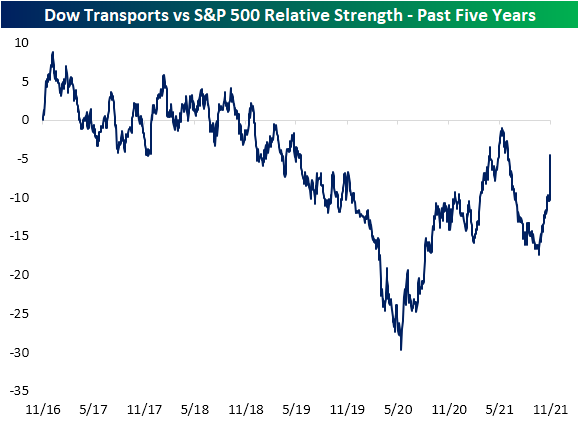 Heading into yesterday, the index was hovering right around resistance at the spring highs. It then surged 6.88% which not only smashed through that resistance but was the largest single-day gain since 5/18/20.  The Dow Transports have a very long history going back to the late 1800s. As for just how impressive yesterday’s move was, since 1900 there have been less than 50 other days with as large of a single day gain. And at the intraday high, the Transports were up an even more impressive 14.5%. 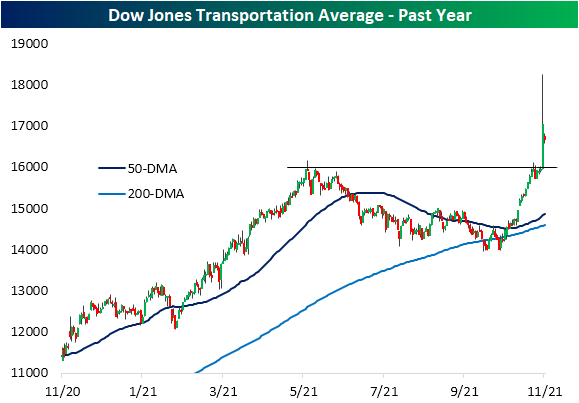 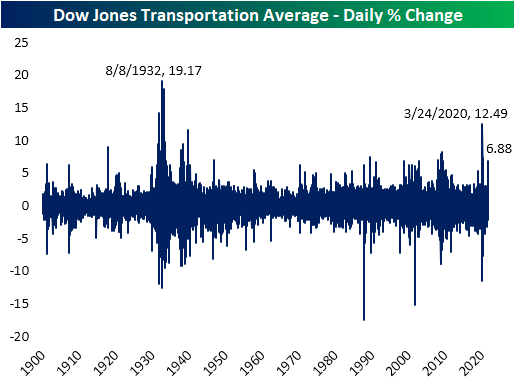 The index’s massive gains can be chalked up to a single name: Avis Budget (CAR).  The car rental stock more than doubled yesterday on better than expected earnings, and potentially there were some short squeeze factors at play as the stock had 29% of shares sold short as of mid-October.  As we noted last week when that data was released, that placed CAR as not only the most heavily shorted Transport stock but the most heavily shorted stock of the whole S&P 1500. 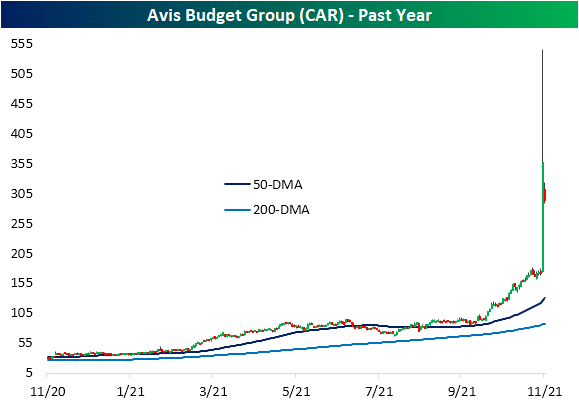 The Dow Transports is a price-weighted index, meaning that stocks with higher prices per share have larger impacts on the index.  After doubling in a single day yesterday and even after falling well over 18% today, CAR is now the second highest-priced stock in the Dow Transports behind Kansas City Southern (KSU). Prior to earnings, CAR ranked as the eighth highest priced stock in the group. The massive move in the past few days has resulted in CAR contributing far more to the moves in the Dow Transports than what is normal.  As for how large of an impact the past couple of sessions have had, below we show the daily point contribution of each member since October 2014 when CAR was added to the index—CAR is one of the most recent additions with the only newer members being United Airlines (UAL) in 2018 and American Airlines (AAL) in 2015. The extremely volatile moves of the stock paired with what is now a high price point relative to the rest of the index has resulted in the stock having major impacts on the day to day moves of the Dow Transportation index. Click here to view Bespoke’s premium membership options. 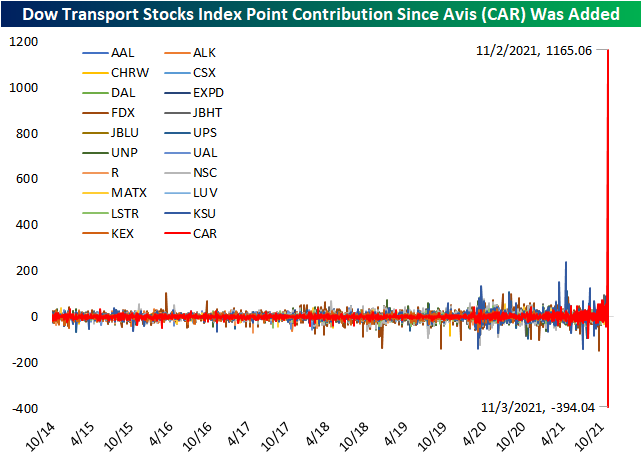