Aussies and the US Lead in Global Yield Curve Steepening

As global COVID curves are flattening, global yield curves have been steepening in a sign that investors are pricing in a much better economic environment. The chart below shows the pattern of the 2s10s yield curve for the US, Australia, the UK, Germany, and Japan since the start of 2020. While all five of them were at similar levels prior to the outbreak of the pandemic, their paths since then have varied widely with the US and Australia seeing the greatest steepening, while the steepness of the three remaining curves has been considerably flatter. Since the outbreak of the pandemic, Australia has been generally thought of as having the strictest response to COVID while the US has been derided for taking the least amount of precautions. Despite the vastly different approaches by both countries, their yield curves have followed nearly identical paths and judging by the slope of their yield curves, the market is anticipating robust economic growth from both countries.

In fact, as we mentioned in today’s Morning Lineup, the 10-year yields of both countries are reaching new 52 week highs today. In the case of Australia, whose 10-year yield rose 17 bps to start the week, the single day steepening of the 2s10s curve today was the biggest since March 17th and 18th of last year. For the US yield curve, it was the second period since the COVID outbreak where the 2s10s yield curve steepened by more than 50 bps over a six-month period.  In Friday’s Bespoke Report, we covered what that has historically meant for equity market performance. Click here to view Bespoke’s premium membership options for our best research available. 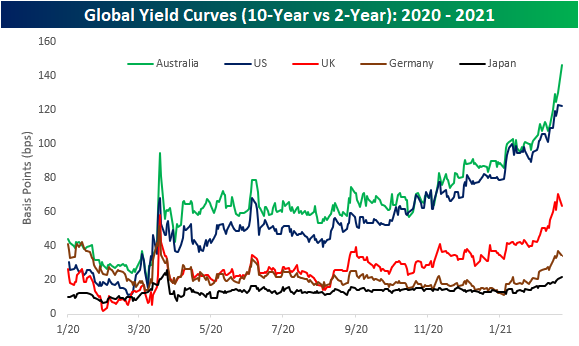