August Declines All Around the World

The end of August is here and US equities, as measured by the S&P 500 ETF (SPY), have been on a wild ride. At the mid-month high, SPY was sitting on a 4.3% month-to-date gain, but that has more than entirely been erased as it is on pace to finish the month down closer to 3.5%.  The country ETF of each other major global economy that we track in our Global Macro Dashboard is a similar story. Across these countries, on average, they had reached a 3.13% gain at their month-to-date highs, but today they are down an average of 3.5% MTD.  Overall, developed markets have faired much worse than emerging market countries with average declines of 4.82% versus 1.24%, respectively.  In fact, there are only two ETFs—Brazil (EWZ) and India (INDA)—that are currently positive for the month. Meanwhile, China (MCHI) is unchanged. On the other end of the spectrum, Sweden (EWD) has been the worst performer nearing an 11% decline with a number of other European nations following up with the next worst performance.

With stock markets around the world giving up the ghost in August, most have moved back below their 50-DMAs or even into oversold territory.  There are no country ETFs more than one standard deviation above their moving averages although EWZ and INDA have only moved out of overbought territory in the past week. 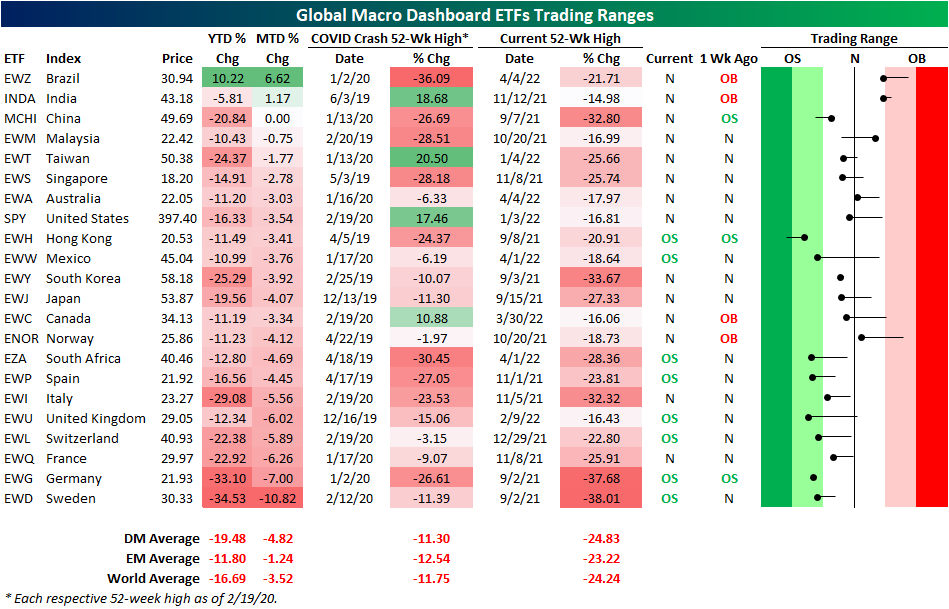 As we show in the table above, this year’s declines have resulted in the average country ETF falling 24% below its 52-week high.  Those declines bring the vast majority of these countries back below pre-COVID highs as well.  At the moment, there are only four countries that remain above pre-COVID 52-week highs: Taiwan (EWT), India (INDA), the United States (SPY), and Canada (EWC). This exclusive group would need to fall substantially further to revert back to those prior highs, and as shown in the chart below, each one would also still have support at lows from earlier this year before pre-COVID highs become a technical level worth eying.  Click here to learn more about Bespoke’s premium stock market research service. 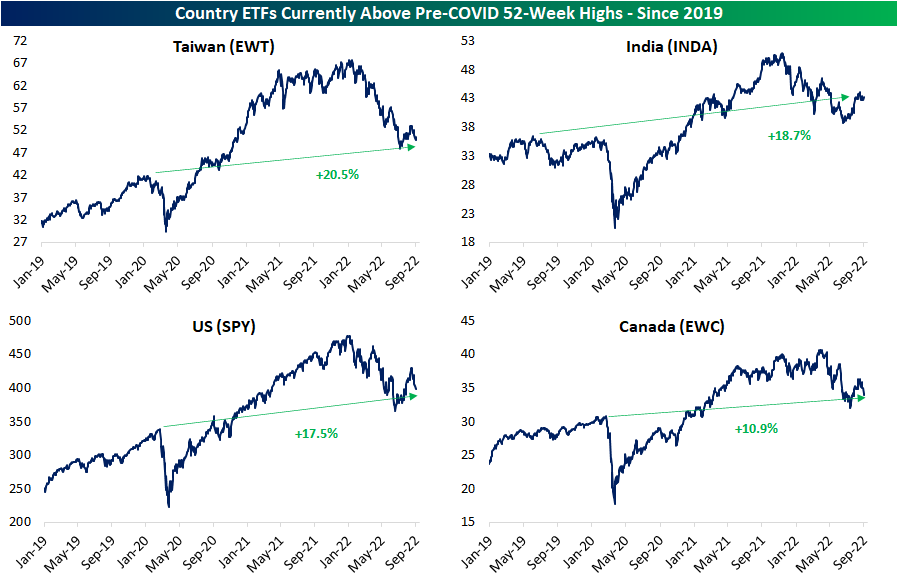