One of the widely talked about pandemic trends has been an increased interest in the stock market. Quantifying this, below we show data from Google Trends. These indices track search interest for various terms where readings of 100 are the peak in interest for a given time frame, a reading of 50 would be when interest was half of that peak, and so on and so forth. Google searches for “Stocks” surged to record highs during last year’s bear market and those highs were taken out earlier this year around the time of the meme stock mania in late January. The same could be said for searches for “Buy Stocks”.  Since then, that interest has unwound but current levels are still above most pre-pandemic levels.  (Red dots indicate search levels during the week of August 9th over the last five years.) 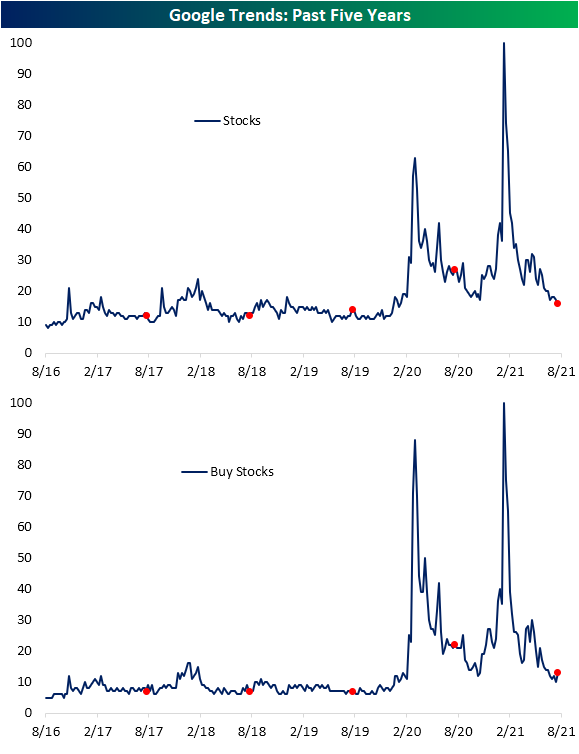 The same could be said for search interest for various brokerages.  Taking a look at the most popular, Robinhood, search interest spiked higher during the meme stock mania and GameStop (GME) short squeeze early this year before getting another boost in the spring around the time of the surge in AMC Entertainment (AMC). Interest has moderated since then, though, the past several weeks have seen a boost potentially as a result of the IPO of the company. 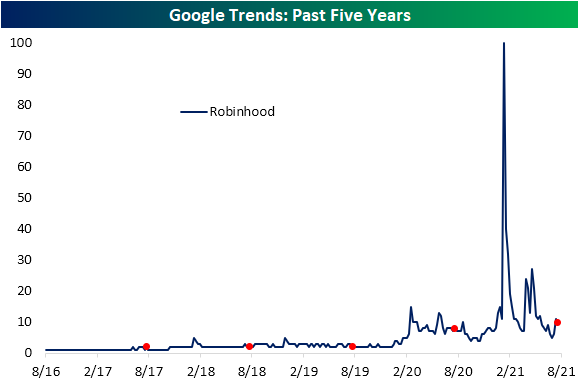 Inflation continues to be a macroeconomic subject that is closely watched, but for the time being, people are searching for it far less than earlier this spring.  In May, searches for “Inflation” reached the highest point on record, and while they are still elevated, the reading has come down a bit.  Searches for “Rising Prices” tell a similar story, though, it peaked earlier in the late winter. 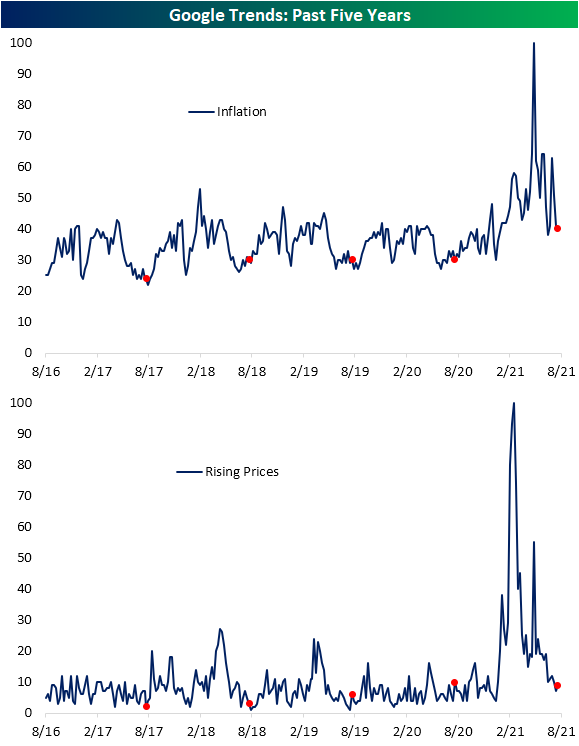 With searches for inflation having surged in the past year, we thought it would be worth looking at search interest for some typical hedges like gold.  While these searches also surged to a record recently, it should be taken with a grain of salt, after all, it is an Olympics year. As shown in the second chart below, historically the month in which the Olympics fall usually sees searches for gold spike. 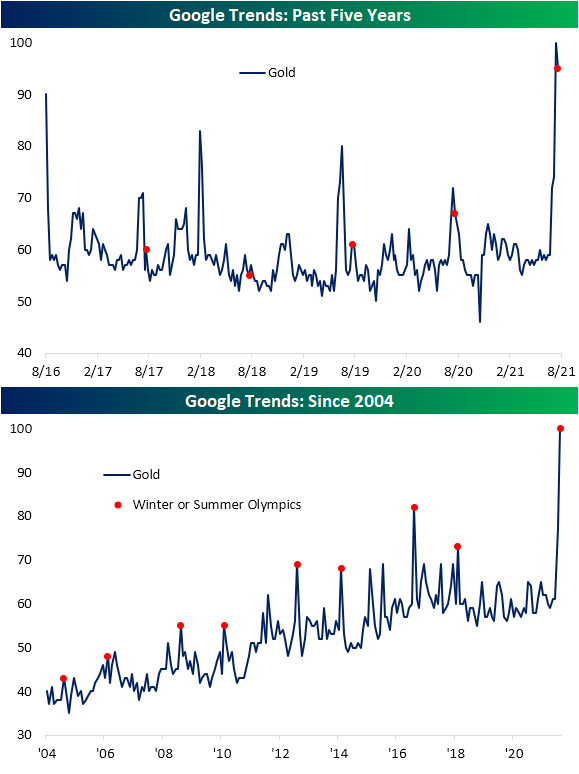 Turning to a more speculative area of the market, below we show searches for crypto-related products.  Bitcoin remains well above most other periods of the past five years but it has been declining and is back below the past year’s range. Additionally, the highs from earlier this year were far from ever hitting the same interest as the craze in late 2017/early 2018.  On the other hand, “Crypto”, “Coinbase”, and “NFT” search interest has come back down to earth after all reaching records earlier this year. These have also seen minor reversals recently with  “NFT” in particular seeing a decent-sized bounce. 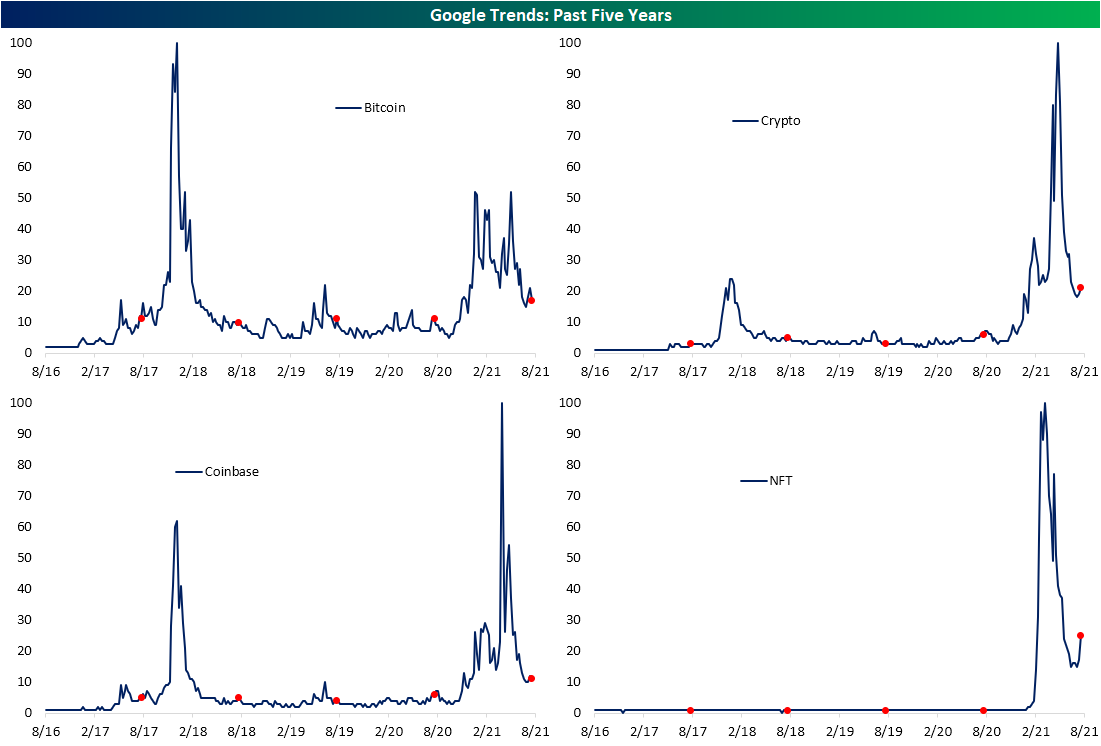 While those digital collectibles have seen interest turn around slightly, searches for “Collectibles” more broadly or a more specific term like “Rookie Card” have been drifting lower.  Interestingly, searches for these collectibles certainly got a boost during the pandemic, but they actually began to trend higher just prior in late 2019. Click here to view Bespoke’s premium membership options. 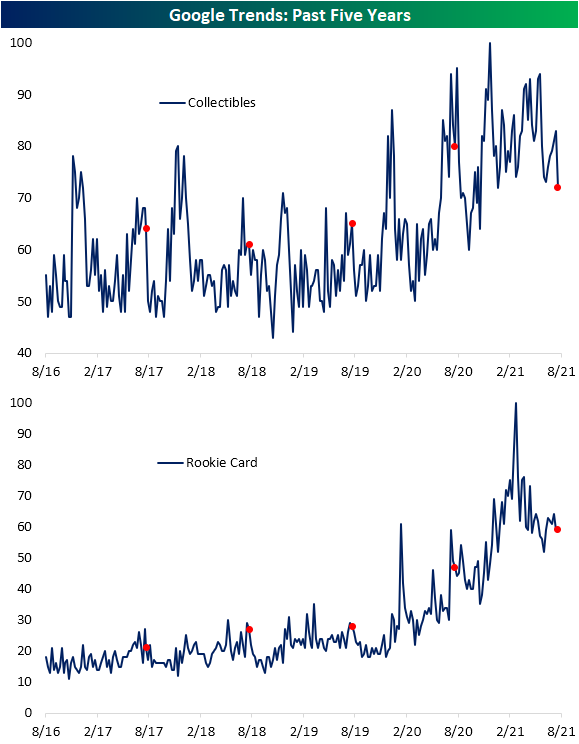