As Vladimir Lenin once wrote “There are decades where nothing happens; and there are weeks where decades happen.” For investors, each passing day of late has felt like a month, as Powell’s Pivot, the Ukrainian conflict, rampant inflation, supply chain constraints, and COVID have caused rapid shifts in investor sentiment, leading to heightened volatility. With each day feeling like an eternity, we decided to look into the average performance by weekday to provide you with insights into trading patterns based on the day of the week. 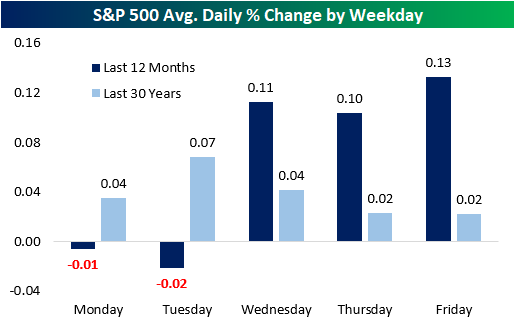 Below we summarize the cumulative performance by weekday for the S&P 500 over the last 30 years. As you can see, Tuesday has been the best performing day by far, booking performance gains of 160.5%. Wednesday has posted a cumulative gain of 83.6%, which lands the day in second place. Friday and Thursday have been the weakest days, booking a cumulative gain of just 27.4% and 28.2%, respectively. Monday lands in the middle, recording a cumulative gain of 41.3%. As outlined above, the recent shift in weekday performance deviates from the norms of the last 30 years as investors have come out of the weekend with fears but concluded the week with optimism. Click here to try out Bespoke’s premium research service. 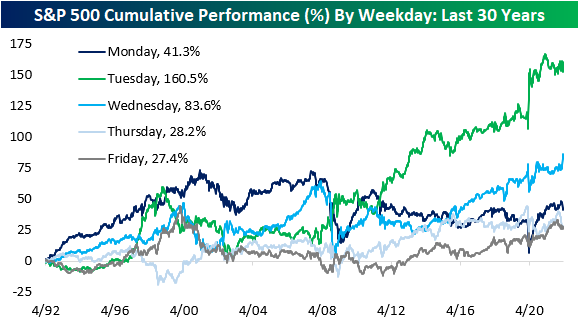