After struggling for most of the past couple months, momentum and Tech stocks are broadly outperforming today as the Nasdaq is up 1.25% compared to a 0.78% gain in the S&P 500.  The ARK Innovation ETF (ARKK) has been a poster child of the momentum theme over the past year.  After a 383.9% gain from the March 2020 low to its high in mid-February, ARKK has fallen around 30% in the months since then.  For most of that time, the ETF consolidated between its 50 and 200-DMA. After a failed attempt to break above its 50-DMA at the end of April, it has taken a leg lower, falling below its 200-DMA for the first time in a year in the process. While ARKK has yet to move back above its 200-DMA, it has found support around $105 which traces back to the lows earlier this spring and the highs from the fall. In other words, from a technical perspective ARKK, as well as some of its holdings, still have plenty of technical hurdles including moving back above its moving averages and breaking the past few months’ downtrends. At least for the time being, the group has found some respite in the move higher today. 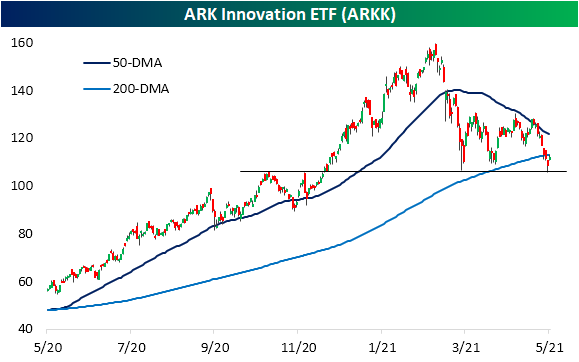 As for the individual holdings of the ARKK ETF, below we show the 25 largest which accounts for approximately three-quarters of net asset value.  For the most part, these stocks continue to sit on huge gains from the past year (or since their market debut for those that have IPO’ed in the past year; bolded and bordered rows in the table below) with only a small handful in the red: Teladoc (TDOC), Coinbase (COIN), and Iovance Biotherapeutics (IOVA). Even though the 25 largest ARKK holdings are on average up 117% over the past year, they have certainly been a pain trade recently. Most of these names are deeply oversold at the moment, and relative to their 52-week highs, they are down 35% on average.  In fact, of all 58 holdings, there are only four—Intercontinental Exchange (ICE), TuSimple (TSP), Trimble (TRMB), and PACCAR (PCAR)—that are less than 10% below their 52-week highs, and none of these break into the top 25 largest holdings (as such they are not pictured below). 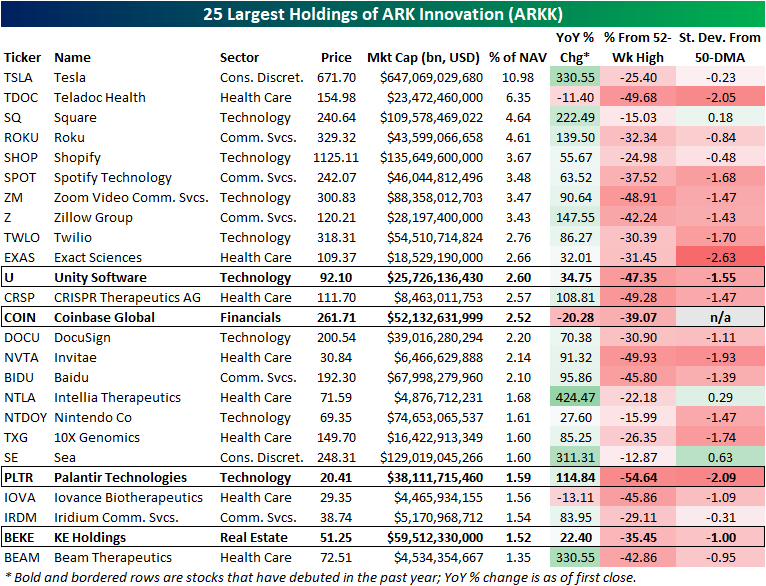 While ARKK holdings have generally been weak over the past few months, in recent days there have been some notable developments in the charts of these names. Some of these like CRISPR Therapeutics (CRSP) and EXACT Sciences (EXAS) have fallen below the long-term 200-DMA. Other names in the ETF broke below their 200-DMA a while ago now, and their charts do not look much better. Stocks like Invitae (NVTA), Materialise (MTLS), and Teladoc (TDOC) collapsed below their long-term moving averages earlier this spring and this week’s moves lower have resulted in breaks of critical support levels. For TDOC and MTLS, those levels have previously marked support at multiple points in the past year. One other interesting name in terms of performance today is Regeneron (REGN).  Unlike many other ARKK stocks, REGN has actually been trending higher since March, albeit that is in the context of a much longer-term downtrend than many other ARKK holdings. Regardless, that recent rally has resulted in the stock to run right up to its long-term downtrend. In another move that is out of sync with its peers, today it has reversed lower, failing to break out from that downtrend. 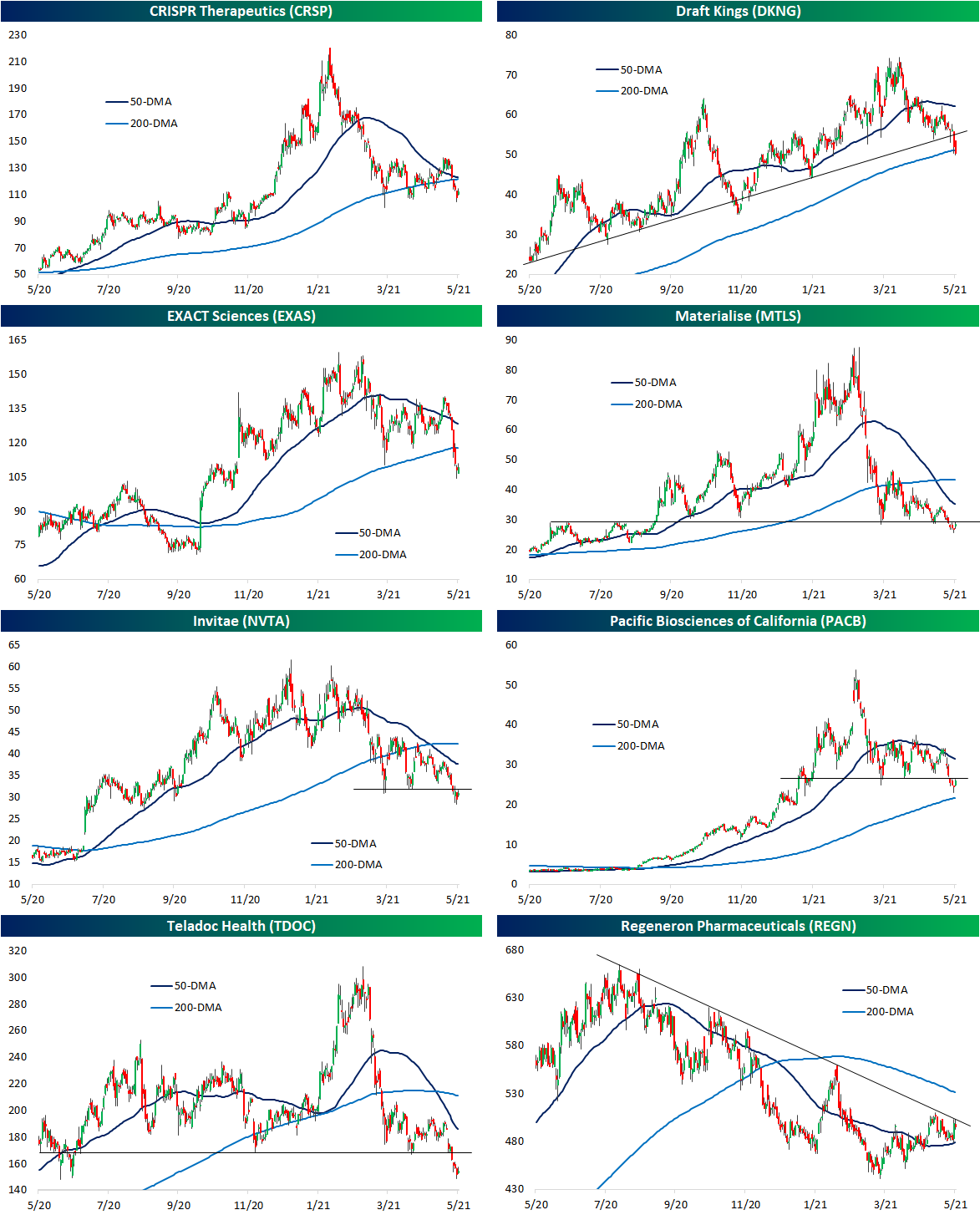 While most names have pulled back sharply and continue to trend lower to sideways at best, that is not to say all ARKK stocks have entirely negative charts. Similar to the ETF’s chart, there are several names that have found support in the past couple of days.  For example, DocuSign (DOCU), Iovance Biotherapeutics (IOVA), Palantir (PLTR), and Spotify (SPOT) are all bouncing off critical support levels of the past year. For others like Fate Therapeutics (FATE), Iridium (IRDM), PagerDuty (PD), PACCAR (PCAR), and Synopsis (SNPS), those support levels have also coincided with their moving averages. PACCAR is also notable in that it is even breaking back above its 50-DMA today. Similarly, Novartis (NVS) is attempting to move back above its 200-DMA. Perhaps one of the most technically strong stocks of these has been Sea Ltd (SEE).  Over the past year, the 50-DMA has consistently provided reliable support. After a brief dip back below in March, in April it moved back above its 50-DMA and has once again successfully retested in the past week.

In order to keep track of the ARK Innovation ETF’s (ARKK) holdings, we created a custom portfolio that members can add here.  Please note that this does not update real time and is only based on ARKK’s holdings as of 5/6/21.

As always, investors should do their own research before buying or selling any securities, and this chart analysis is in no way meant to be a buy or sell recommendation.  Click here to view Bespoke’s premium membership options for our best research available. 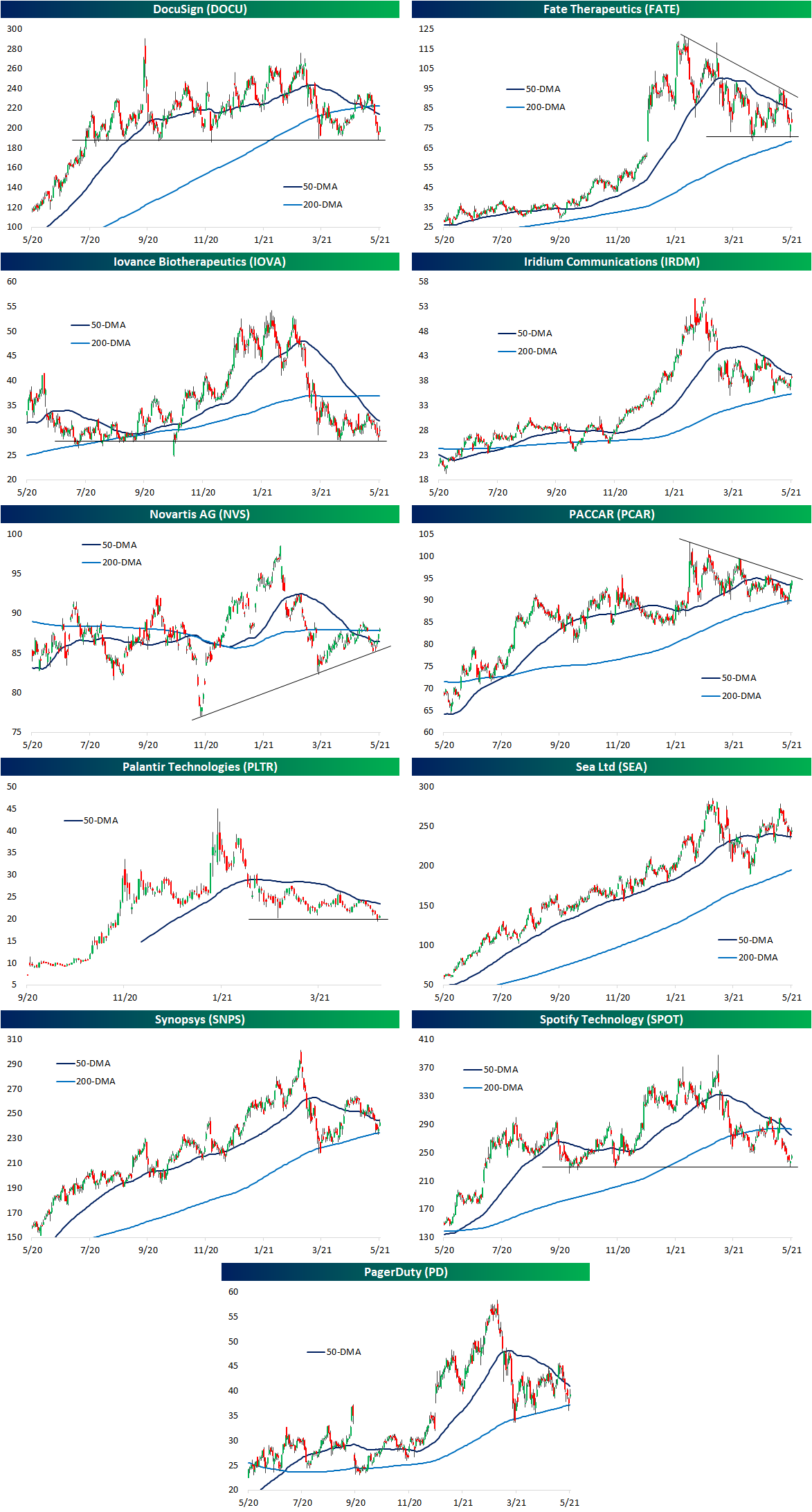