The recent struggles of the ARK Innovation ETF (ARKK) have been well-documented, so while there’s no reason to state the obvious, the last couple of days have been notable for a couple of reasons.  ARKK broke and closed below its 200-day moving average (DMA) for the first time in over a year last week.  It then attempted to bounce on Friday, but as shown in the zoomed-in inlay on the chart, the bounce ran out of steam just at the 200-DMA (two cents above) before reversing lower.  Today, that reversal has continued to pick up steam, and ARKK is now in danger of closing below its breakout point from late 2020. 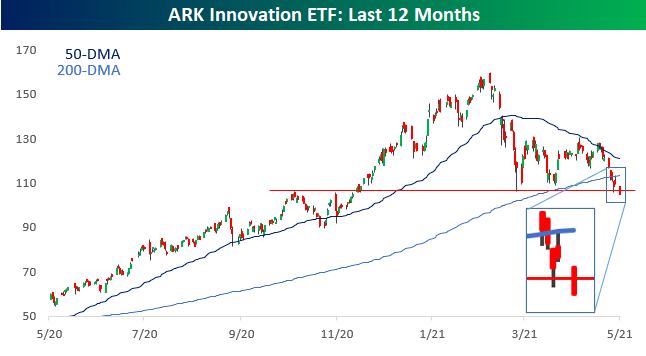 In looking at the rise and fall of ARKK over the last year, it’s interesting to note that Google Search trends for the ticker ‘ARKK’ peaked within a couple of days of the ETF’s peak. 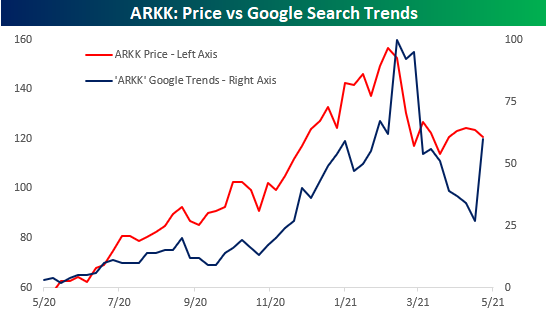 Through Monday Morning, ARKK is already down 13% in May, which would rank as the 5th worst month since the ETF’s launch in late 2014.  Remember that it’s only May 10th!  The table below lists ARKK’s 25 largest holdings and their performance so far this month, this year, and over the last 12 months.  Tesla (TSLA) is ARKK’s largest holding, and while it’s down sharply this month, it’s actually doing better than ARKK with a MTD decline of 9%.  What really stands out on this table is the fact that all 25 of the ETF’s largest holdings are down MTD.  It’s pretty bonkers that performance has been this overwhelmingly negative especially in a month where the S&P 500 is up over 1%.  The fact that performance has been so weak relative to the rest of the market hints at the possibility that some investors are actively betting against the fund’s holdings as growth stocks fall out of favor.

With such large declines already in May, the YTD performance of ARKK’s holdings has only gotten worse.  Even with the S&P 500 up over 10% YTD, all but three of the 25 largest holdings are in the red on the year with four stocks losing more than a third of their value.  In spite of all the short-term weakness, though, the performance of ARKK’s largest holdings over the last 12 months remains strong and is one reason why investors have been willing to stick with the company’s funds up to this point.  Click here to view Bespoke’s premium membership options for our best research available. 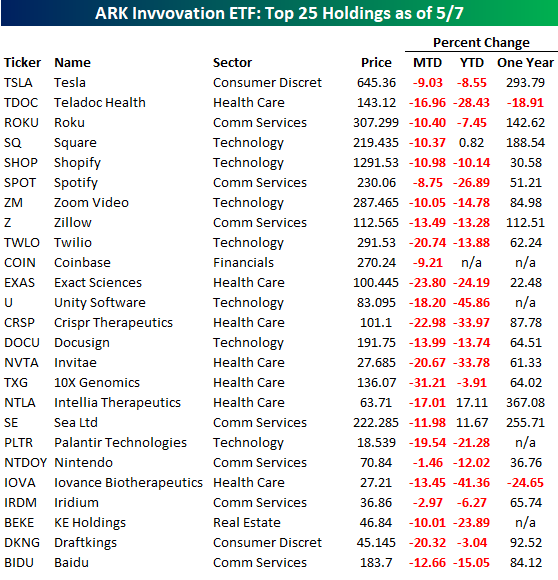