Are the Financials and Energy Sectors Due for Rotation?

As we noted in today’s Morning Lineup and an earlier post, the Energy sector far and away has been the best performing S&P 500 sector in Q1. The sector is on pace to close out the quarter with a gain of just under 30%. That is nearly double the return of the next best performing sector: Financials.  Granted, Financials have likewise been on an impressive run, gaining over 15%.

As shown in the charts below, going back to at least 1990, Q1 of 2021 is on pace to go down as the Energy sector’s single largest quarterly gain on record. Amazingly, the next two quarters that stand as runners-up have both come within the past year. Those were last quarter when the sector rose 25.78% and Q2 of 2020 when it rallied 28.68%. For the Financial sector, this quarter’s gain stands in the top decile of all quarterly moves of the past three decades, and that follows last quarter’s 22.52% gain which stands in the top 5%.  As shown in the charts below, for both sectors, gains of 15% or more in a single quarter have been fairly uncommon with only a handful of past instances. 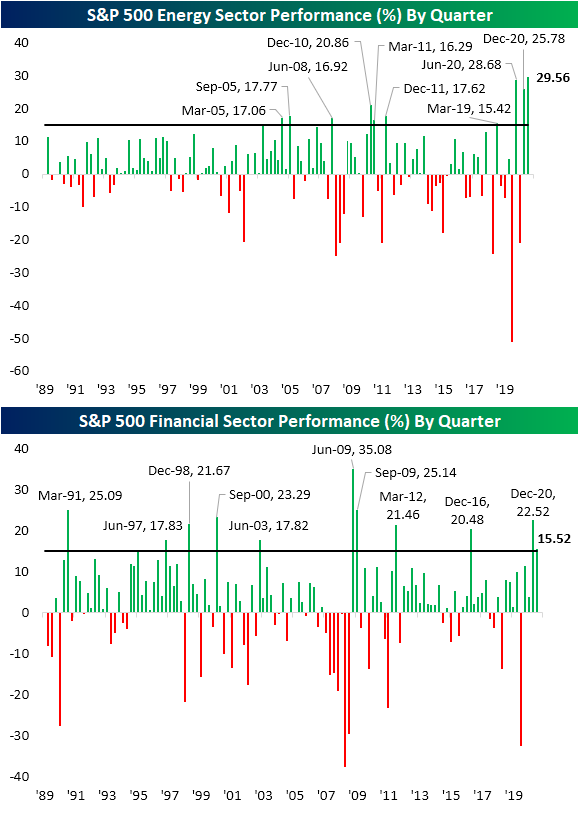 That brings to question if strong runs in one quarter result in rotation out of those sectors the following quarter.  In the tables below, we show the performance of the Financials and Energy sectors from the end of quarters with gains of 15% or more.  Starting with a look at Financials, that rotation has not necessarily always occurred as the sector has consistently risen over the following three months. Of the ten prior instances, there have only been two quarters, Q3 2009 and Q1 2012, in which Financials were lower by the end of the next quarter. Those were also some of the few times that Financials were lower at the end of the first and second month of the quarter. We would note, though, that the current instance is also the first time since 2009 that there have been back-to-back quarters that the sector has seen gains of 15% or more. Back during that last occurrence (Q3 2009), returns were in fact weaker after that second quarter of large gains. 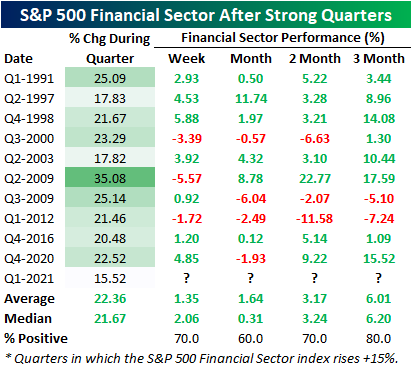 As for the Energy sector, of the nine prior instances where the sector rallied over 15%, this was the first time with two sequential quarters boasting 15% or larger gains. Additionally, rotation out of Energy stocks has been far more commonplace. As shown in the table below, from the conclusion of those quarters with big gains, the sector has averaged a decline throughout the next quarter.  Click here to view Bespoke’s premium membership options for our best research available. 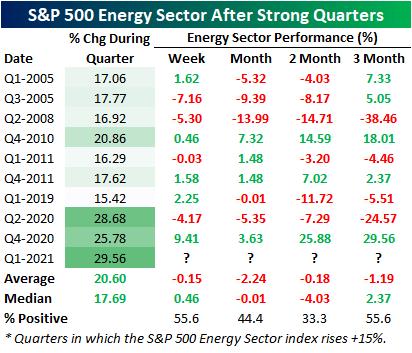