We’ve seen a lot of media coverage focused on the idea that small investors are piling into the market and driving lots of the aggressive price action in recent months. This phenomenon was around before the March plunge in the market, but with bankrupt rental car companies (HTZ), flailing airlines (AAL), and Chapter 11 energy names (CHK) showing up in lists of stocks most widely-held by retail investors along with hyper-speculative plays on hot new products like electric truck manufacturer NKLA, it’s easy to see why people might get the idea that small retail investors flush with commission-free trading confidence might be having an outsized impact.

To test this theory, we started with the theory that relatively small traders are more likely to buy lower dollar price stocks. It’s easier to dip your toe into a $1 stock than a $150 stock, even if the division of the company’s value is arbitrary. For small-dollar accounts, that truism is the most important. Starting on October 7th of last year, Charles Schwab (SCHW) started offering commission-free trading to brokerage clients, competing with popular zero-commission product Robinhood. Fidelity and other brokers followed shortly after. In the year before October 7th, stocks with low dollar prices were notable underperformers relative to the rest of the market. The chart below uses the Russell 3000 as its sample and breaks the index into deciles (10 groups of 300 stocks each) based on share price. Since Schwab went to $0 commissions, the lowest priced stocks have been huge outperformers, and in fact the decile of stocks with the lowest per share prices are up 15%, substantially more than the rest of the market. To us, this looks like plausible evidence that smaller traders are playing at least some role in the performance of the market.  We discussed this chart and other retail enthusiasm indicators in last night’s Closer report, which is available to Bespoke Institutional members.  Click here to start a two-week free trial.

We’d note that the decile of the highest priced stocks has also outperformed over the same time period.  Since $0 commissions began, we’ve also seen the introduction of fractional share trading on many online brokerage platforms, which allows investors to buy stocks by dollar amount instead of share amount.  This now lets a small-dollar investor easily invest in high-priced stocks above $1,000/share like AMZN and GOOGL.  Instead of having to buy a share of AMZN at $1,400, an investor can now simply buy $100 worth of AMZN and own a fraction of a share. 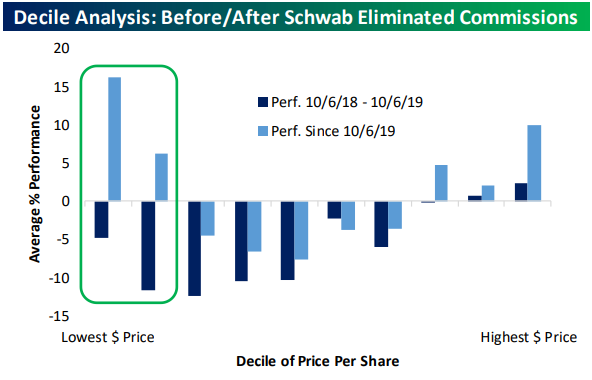