Apple (AAPL) Back on Top

When Apple (AAPL) overtook Microsoft (MSFT) in size back in 2010, a lot of people thought Microsoft’s best days were behind it.  By late 2012, Apple’s market cap had eclipsed $600 billion while Microsoft was still trending lower and lower towards the $200 billion level.

The tide for MSFT finally started to turn in 2013, and since current CEO Satya Nadella took over in February 2014, the company has seen its market cap increase by 2.5x from $300 billion up to its current size of $1.068 trillion.

During the fourth quarter rout for US equities in 2018, Apple (AAPL) shares tumbled much more than Microsoft (MSFT), which allowed MSFT to slip ahead of AAPL in terms of size.  While the two battled it out during the first quarter recovery this year, Apple shares got hit extra hard in May when the US/China trade war really heated up, allowing MSFT to take a commanding lead in market cap.

Recently, though, it has been Apple that has been surging as Microsoft has traded more sideways.  Apple hit a new all-time high again last week, and on Friday the company managed to close the week with a market cap that was just under $1 billion higher than that of Microsoft.  Today we’re seeing the gap widen a little more as Apple’s market cap trades at $1.072 trillion versus MSFT’s cap of $1.068 trillion. When you’re talking in the trillions, though, what’s four billion between friends.

With levels that are so close, one up day for MSFT and down day for AAPL could give MSFT the lead again, but for now, Apple has regained its title as the world’s largest company.  Start a two-week free trial to Bespoke Premium to sample our most actionable investment research.  If you use this checkout link, you’ll receive a 10% discount on an annual membership if you stick with it past your trial period. 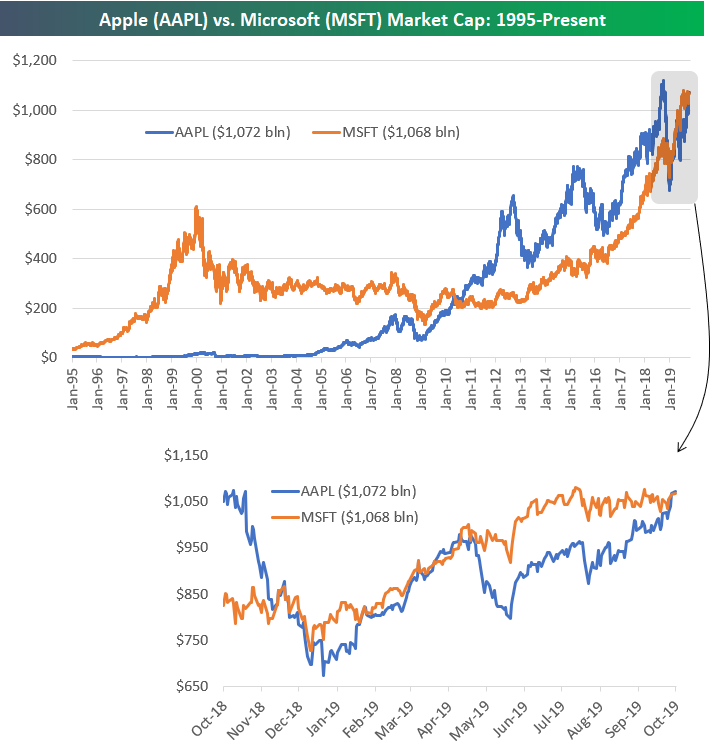