Social media has been one of the most popular and controversial sectors of society over the last decade, and the performance of Facebook (FB) since its IPO illustrates the strength of a business that thrives on people keeping tabs of each other with a steady helping of ads in between.  It hasn’t always been a smooth ride for Facebook (FB), though.  Remember the ‘technical error’ on the day of the IPO back in May 2012?  From there, things didn’t get much better quickly.  In September 2012 the stock was down in the low $20s after its IPO at $38, and a Barron’s cover story said the stock was worth just $15.  Facebook (FB) never did get down to $15 per share.  Ironically enough, it’s now 15 times higher than its lowest ever closing price of $17.73 that it traded at right before the Barron’s article. The chart of Facebook since its IPO shows that the road forward hasn’t always been smooth, but for Facebook, it has been a success. 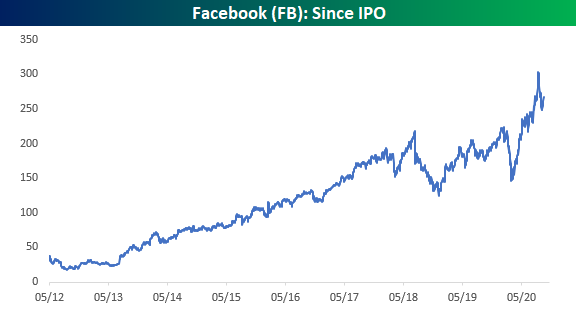 The performance of Facebook (FB) suggests that it has been good to be a social media stock over the last several years, but for other stocks in the sector, life as a public company has been anything but likable. Let’s start with Twitter (TWTR) which came public just after FB started to break out.  TWTR’s IPO price was $26 per share, but it immediately traded up above $70 before the end of 2013.  For the next two years, though, TWTR did nothing but trade lower.  It wasn’t until shortly after President Trump took office that the stock started to bottom out and rally again.  At its current level of $46, TWTR is above its IPO price but still down more than 35% as it tries to break above two prior highs at similar levels in mid-2018 and mid-2019.  Will the third time be the charm or a strikeout? 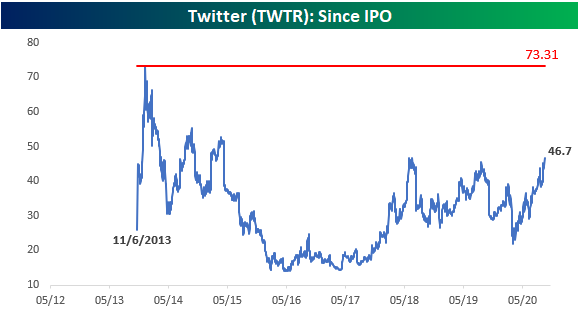 Finally, there’s Snap (SNAP).  Of the three publicly traded social media companies, SNAP is easily the most popular among kids, but even with that popularity, most of its time as a public company has been forgettable.  The stock IPO-ed at $17 on 3/1/17 just as TWTR was near its post-IPO lows.  Despite the tough environment that TWTR experienced, within two days SNAP was up over 50% and above $27.  Like everything else on the app, though, SNAP’s gains quickly disappeared, and by the end of December 2018, it closed below $5 per share.  In the less than two years since that low in December 2018, SNAP has made an impressive comeback, and as of yesterday’s close was within 50 cents of a new closing high.  It took Facebook (FB) a year to take out its IPO price, but from there it was off to the races for the stock.  In SNAP’s case, it has taken more than three years to even get back near its initial IPO highs, but now that it’s close to those levels again, shareholders are hoping it will have been worth the wait.  Click here to view Bespoke’s premium membership options for our best research available. 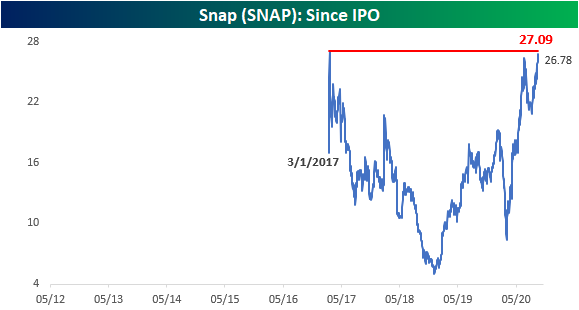