Another Record in Gun Background Checks

It seems to happen every month these days, so it shouldn’t come as much of a surprise that FBI background checks for the purchase of firearms hit a new record in March, rising by more than a million to 4,691,738.  It used to be that background checks followed a relatively steady saw-tooth seasonal pattern where, as shown in the chart below, they would fall throughout the first half of the year, bottom out in mid-Summer, and then steadily rise throughout the second half of the year.  That seasonal trend became less consistent in the early part of the last decade and has completely broken down in the last two years.  Now, it seems that the monthly number of background checks goes in one direction – up!

Despite rising to new record highs, the pace of growth in background checks has started to slow down a bit.  March’s growth rate was 25.4%, and while that is still an extremely rapid rate of increase, it’s at the low end of the range from the last year where the y/y change in checks peaked out at 79.2% last July in the midst of the nationwide protests around the country.  Click here to view Bespoke’s premium membership options for our best research available.

Just as the stock market and the economy don’t always move in lockstep with each other, the stocks of gun manufacturers don’t necessarily follow the path of gun background checks/sales.  The charts below show the performance of the two largest publicly traded gun manufacturers over the last year – Sturm Ruger (RGR) and Smith and Wesson (SWBI).  While background checks are at all-time highs, the prices of both stocks have corrected significantly from their highs last summer.  After declines of 30%+ from peak to trough for both stocks, they have essentially been rangebound now for six months.  However, while both stocks have been dead money, they haven’t broken down.  In both cases, they have repeatedly bounced at support (~$60 for RGR and ~$15 for SWBI).  As long as those levels continue to hold, they may be loaded with more than just blanks. 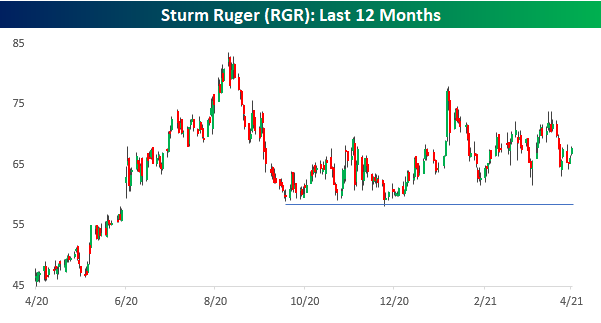 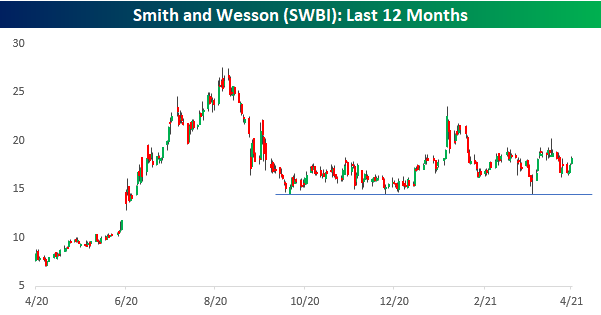