It may sound completely illogical now, but another Middle-East conflict involving Iran looks like it’s going to stop a crude oil rally in its tracks. After last Friday’s drone strike in Iraq that killed Iranian General Soleimani, crude oil prices originally surged 6% rising from $61.18 up to $64.72.  Since that peak, though, prices have given up 60% of their gains and are now up just 2.4% since last Thursday’s close.  While prices are still higher relative to where they were last Thursday, the current pattern is beginning to look a lot like the pattern we saw following other Iran-related issues in the Middle East over the last year.

Back in April 2019, crude oil capped off a 30% rally with a gain of 2.5% after the US announced it would end any waivers to countries importing Iranian oil.  Cutting off Iranian oil from the market would cut supply which should have led to higher prices, but after that short-term move higher, prices reversed lower falling more than 20% in less than two months.  In September, crude oil prices saw an even larger one-day move of nearly 15% after Saudi oil fields were attacked by what was widely believed to be Iranian drones.  The rally from that attack lasted all but a day and within two weeks all of the gains (and more) were erased.  The latest surge in crude oil prices also followed what was a steady uptrend (like the one in April), and like that rally, will Friday’s rally end up marking another blow-off top?  Join Bespoke Premium to receive our best investment research on a daily basis.  Click here to receive half off for the first three months. 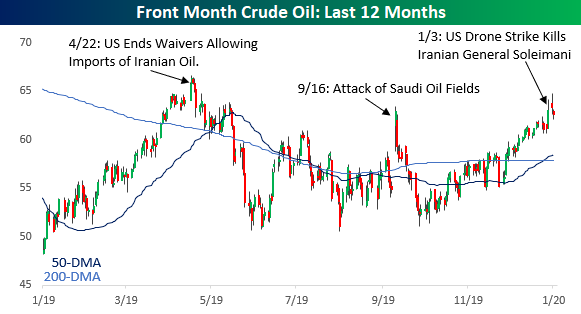