Another Increase in Investor Sentiment

While a number of investor sentiment surveys ask investors for their views on the market, one less widely followed index from TD Ameritrade seeks to gauge sentiment by what investors are actually doing.  According to TD Ameritrade, the Investor Movement Index (IMX):

The Investor Movement Index, or the IMX, is a proprietary, behavior-based index created by TD Ameritrade designed to indicate the sentiment of individual investors’ portfolios. It measures what investors are actually doing, and how they are actually positioned in the markets.  The IMX does this by using data including holdings/positions, trading activity, and other data from a sample of our 11 million funded client accounts.

The latest update to the IMX index for January was released earlier and showed that investor sentiment improved as investors increased equity market exposure for the fourth straight month, which is tied for the longest streak of monthly improvement since early 2014.  The improved readings in the IMX index over the last four months have also taken the level of the index to its highest since October 2018.

In looking at longer-term trends for the IMX index, it’s interesting to note that while sentiment has really ticked higher in the last four months, it is still nowhere near levels it was at in late 2017/early 2018 just before equities peaked and saw an 18-month consolidation period.  This reinforces a broader trend we have seen in other sentiment readings recently.  Namely, investor sentiment has clearly improved, but investors still have one eye warily looking over their shoulders.  Start a two-week free trial to Bespoke Institutional for full access to our highly sought market analysis and interactive investment tools. 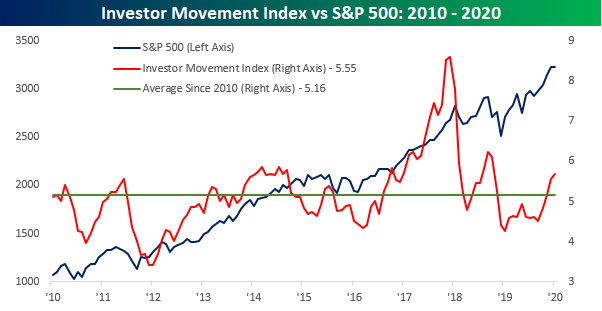