Another Deceleration Out of Dallas

November regional Fed manufacturing surveys have been pretty mixed but generally have shown activity decelerating.  The fifth and final report out of the Dallas Fed released this morning reiterated that slowdown in manufacturing activity. The Dallas Fed’s headline reading was expected to show a modest increase from 14.6 to 15.0. Instead, as with other regional Fed surveys, activity decelerated with Business Activity falling to 11.8.  While current conditions did not improve as rapidly as expected, expectations were relatively optimistic and have risen sharply over the past two months recovering most of the decline since June’s high. 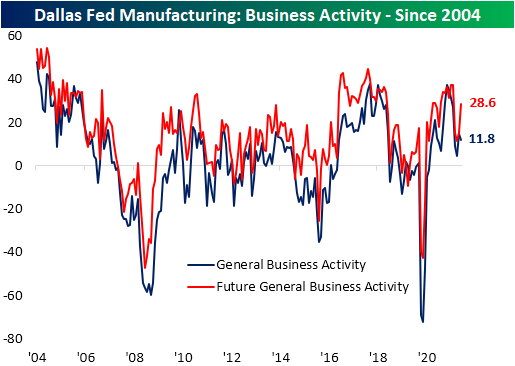 While General Business Activity was lower, under the hood the report was pretty good with more categories moving higher than lower. Additionally, the bulk of these categories remain at historically strong levels.  In fact, Company Outlook is the only one in the lower half of its historical range. General Business Activity and Captial Expenditures are the only others that are not in the upper quartile of readings.

Demand has continued to rebound with New Orders rising from 14.9 in October to 19.6 this month.  Given the higher Order Growth Rate, Unfilled Orders also continue to rise at a historically elevated rate, though, that reading did fall in November as Shipments have picked up. 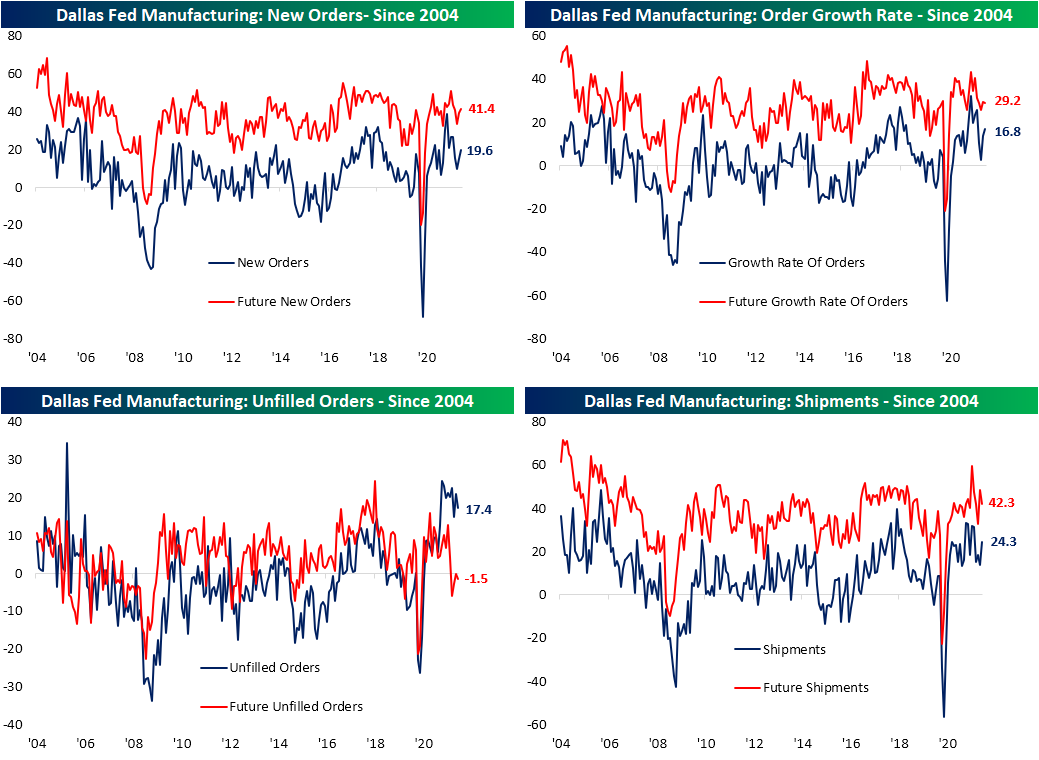 That increase in Shipments also likely had to do with alleviation for supply chains as the index for Delivery Times fell by 4.2 points.  Other regional Fed surveys echoed those results this month with declines in Delivery Times of their own. That being said, the index remains historically elevated, and the commentary of the report points to a slew of supply chain-related issues holding back business. Given Delivery Times were not as long and production has risen, Inventories rose back into positive territory. 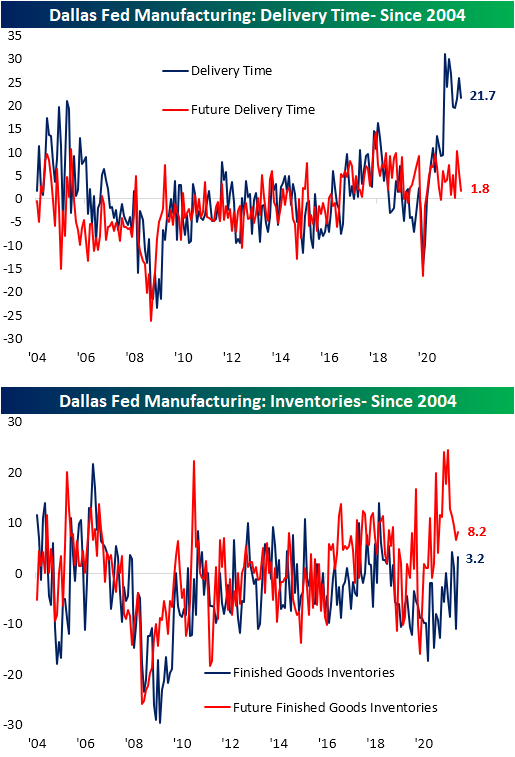 While there is evidence of improving supply chains, prices for raw materials are still rising.  The index for Prices Paid has resumed its move higher and set the first record high since June.  Conversely, Prices Received experienced a sharp reversal lower from a record high set last month. 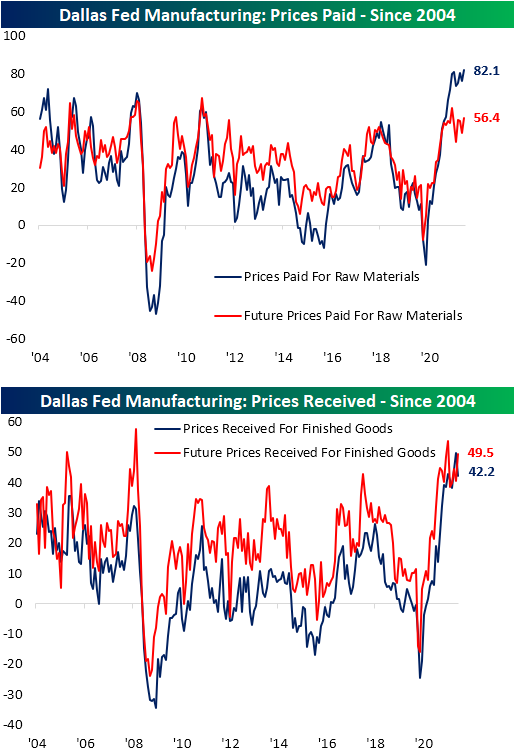 The price of labor is also continuing to rise. The index for Wages and Benefits came in only a half-point below the June record high. Even though current conditions narrowly missed a new high, expectations did set a new record.  Not only did firms report that they expect to pay more for labor, but the same goes for Capital Expenditures. That category’s expectations index hit the highest level since March 2019 in November even while the current conditions index came in at the lowest level since the end of 2020. Pivoting back to labor, the index for Employment and Hours Worked were both moderately higher in November. Expectations for these two categories also rebounded after steep drops in October. Click here to view Bespoke’s premium membership options. 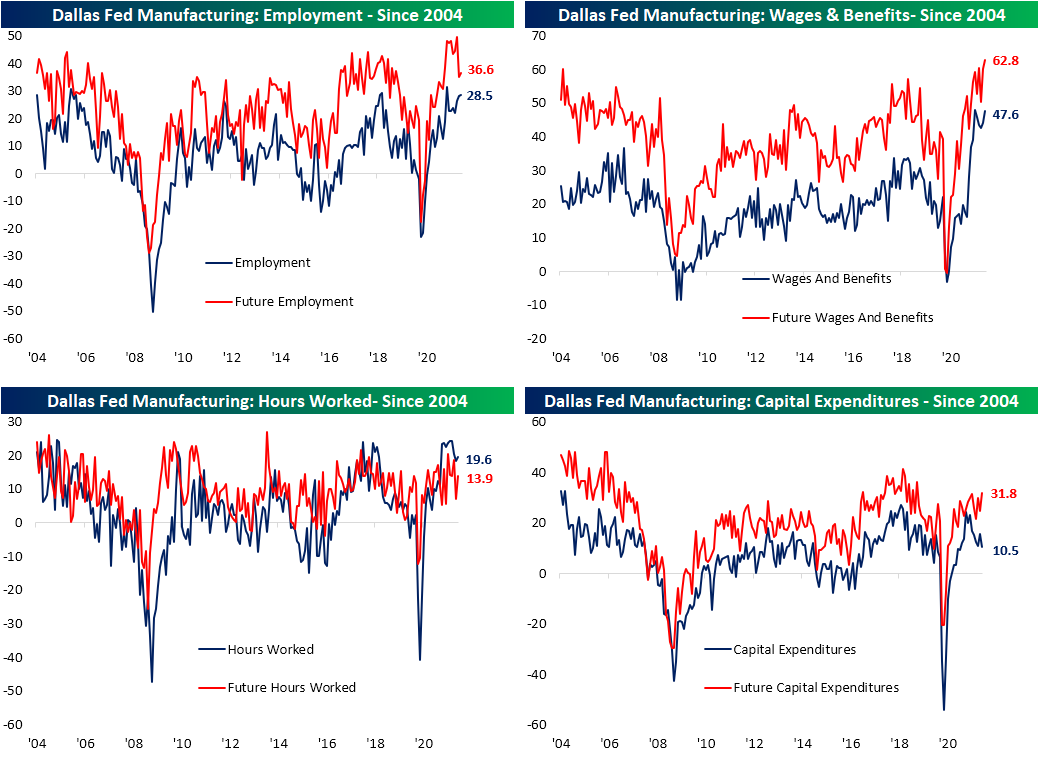