Another Day, Another Strong Manufacturing Survey

Monday’s monthly report from the Dallas Fed showed yet another strong reading on the manufacturing sector.  The headline index tracking the region’s General Business Activity came in at the highest level in just under three years, rising 8.4 points to 37.3. Not only was that a multiyear high, but this month’s reading is also in the top 3% of all months since the start of the survey in 2004. Expectations also are optimistic with the index rising to the strongest level since September 2018.  The indices for Company Outlook similarly rose to levels not seen since 2018. 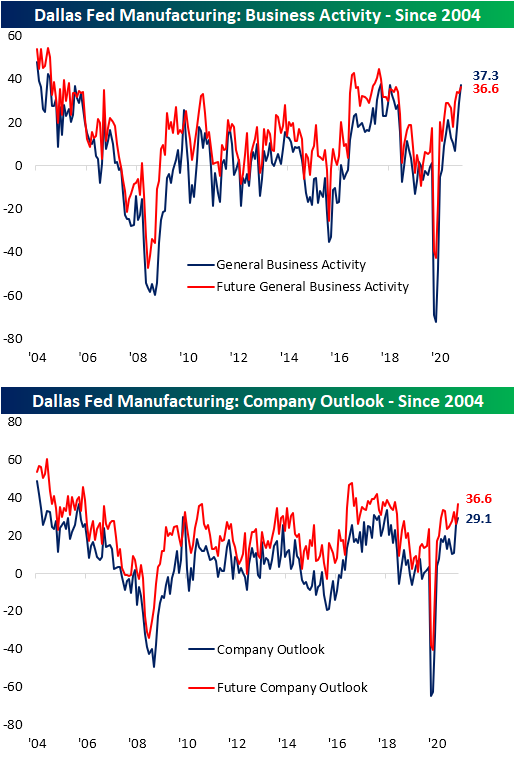 Given businesses are reporting as more optimistic, uncertainty continues to fall.  In fact, the Outlook Uncertainty Index fell to zero this month which indicates that uncertainty among the region’s manufacturers is no longer on the rise. While there is not nearly as extensive of a history of this index as the rest of the survey (only dating back to 2018), this was the first non-positive reading since May 2018. 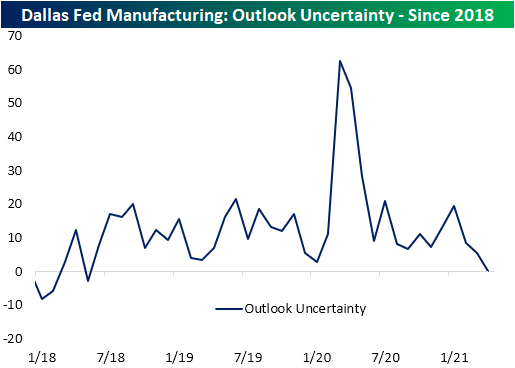 With strong readings in broader measures of activity, the majority of indices in the report remain in the top percentiles of readings. The only exception is Inventories which is in the bottom 40% of readings after falling 3 points this month.  On the other hand, there were several indices like those for New Orders and Employment which were at the highest levels on record.  Those strong readings do come with a caveat though.  Breadth in this month’s report was a bit mixed with just over a half-dozen indices falling month over month.  Despite these indices all staying in the top decile of readings after those declines, we would note that the drops in the indices for Production, Capacity Utilization, and Delivery Times were historically large for a single month.

Taking a more granular look at these indices, demand continues to grow at a historically strong clip. Both indices for New Orders and the Growth Rate of Orders rose to record highs.  In spite of the acceleration in demand, the index for Unfilled Orders was actually slightly lower falling 1.4 points. That indicates that with surging new orders, backlogs continued to grow in April but actually at a slower pace than March. Even after that deceleration, though, Unfilled Orders sit well above the vast majority of historical readings. Shipments similarly pulled back ever so slightly in April indicating the region’s businesses are trying to match that demand. 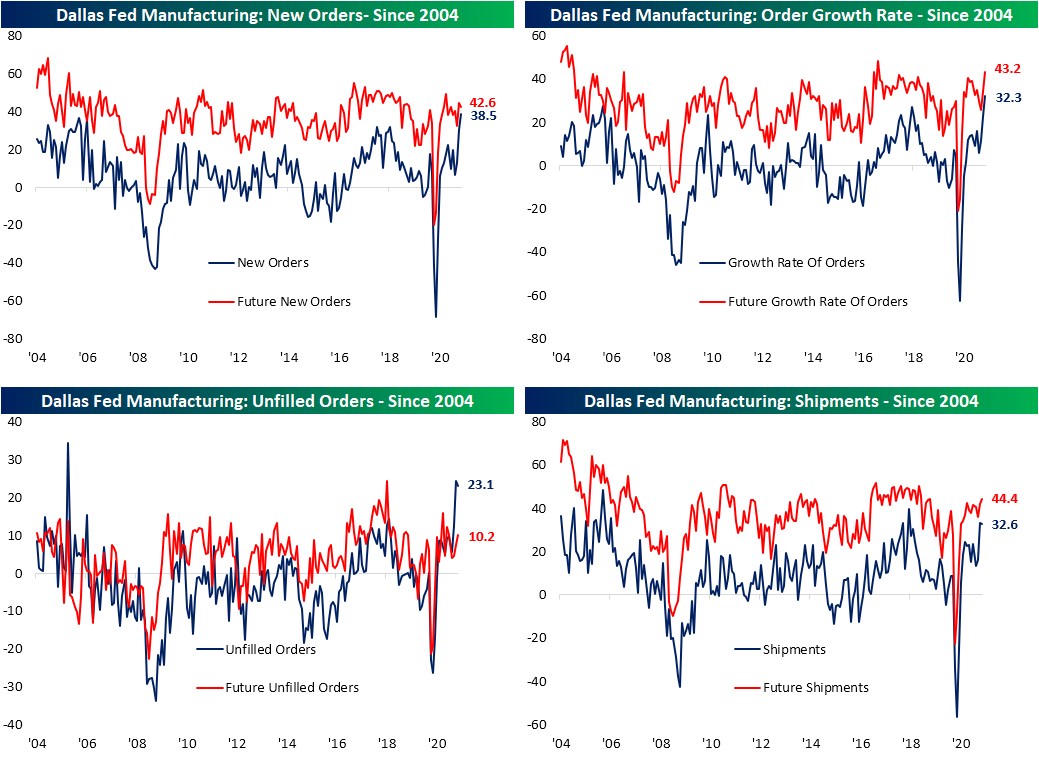 The bigger declines came out of the indices for Production and Capacity Utilization. Again, these indices still sit at strong levels well above past years’ readings but did markedly decelerate in April.  Comments highlighted in the release help to give some anecdotal evidence as to the reasons why production has hit the brakes.   A few common themes throughout the comments include the impact of winter storms, rising prices (especially for inputs and freight), a lack of labor, and supply chain strain. 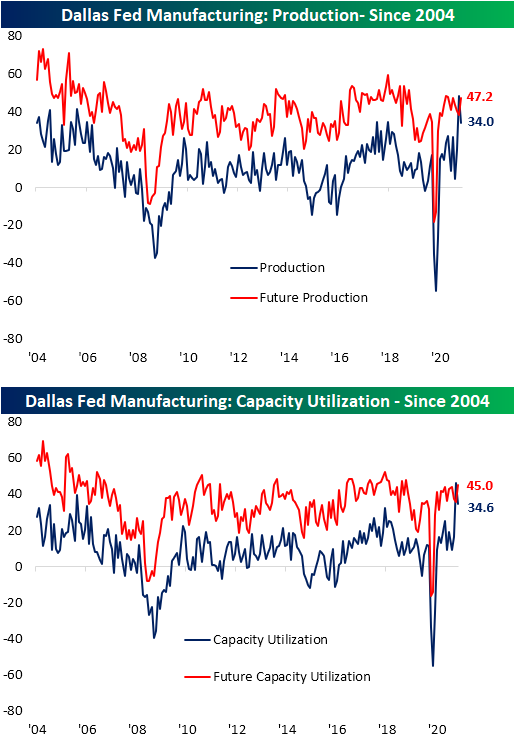 Other areas of the report back up those claims. Regarding prices, Prices Paid rose for the ninth month in a row topping 70 for the first and only time since October 2004.  Meanwhile. those price increases are being passed along as the index for Prices Received rose to a record high. 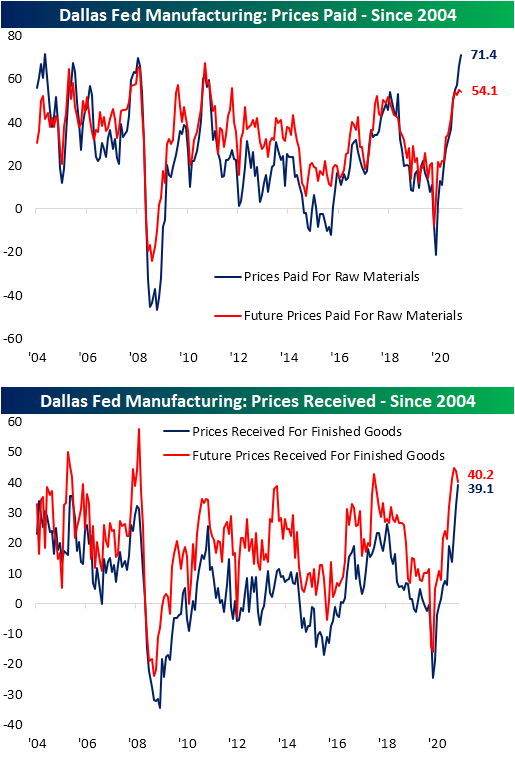 Employment was another area that was frequently flagged as a concern among reporting businesses.  Many comments noted the difficulty in hiring even with generous pay offers. Even though there seems to be trouble finding enough workers, workers are coming back at a historic rate.  The index for Employment (both current conditions and expectations) marked the highest level to date as did Wages & Benefits.  Additionally, the month-over-month rises in the indices stand in the top few percent of all months in the history of the survey. In other words, businesses are and want to continue to take on more employees and are raising pay to do so. On top of raising headcounts, Capital Expenditures also continue to grow although there was some deceleration in April. Click here to view Bespoke’s premium membership options for our best research available. 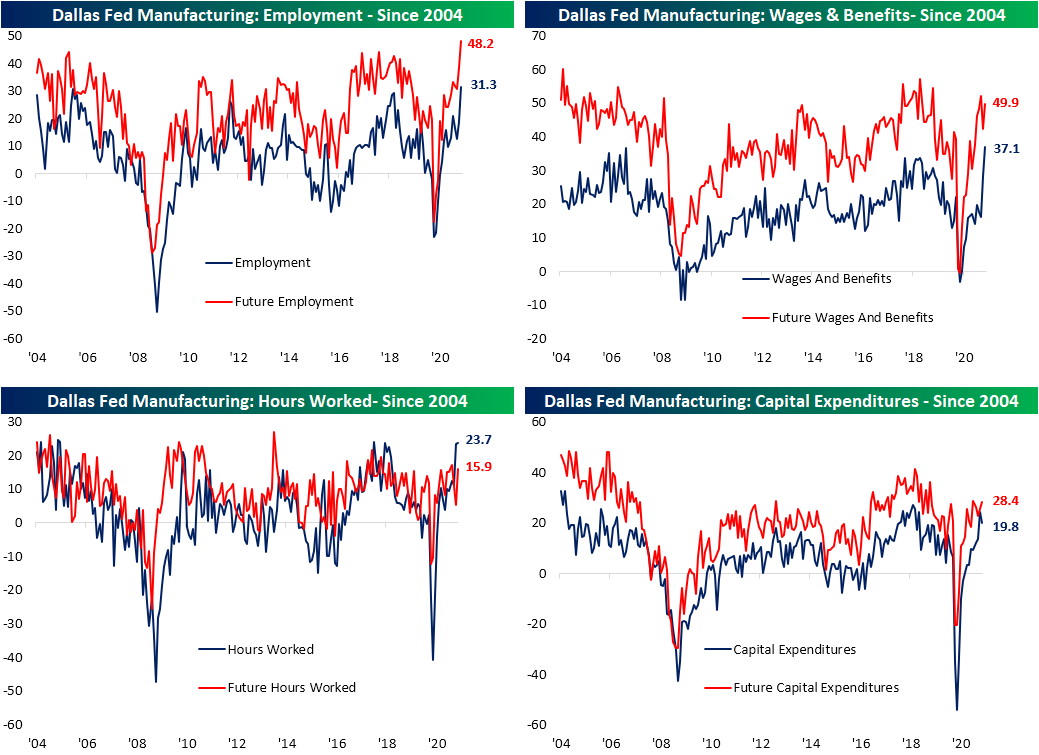