Another CPI Spike… Now What?

As mentioned in today’s Morning Lineup, the consumer price index (CPI) rose 7.0% year over year in December, the highest rate of increase since 1982. Consumers across America are paying higher prices for everything from bread to gas due to supply chain constraints, labor shortages, easy fiscal and monetary policy, and robust demand. Although this number was in line with estimates, the y/y increase is certainly notable. 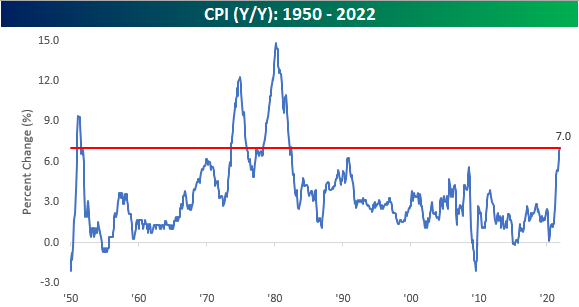 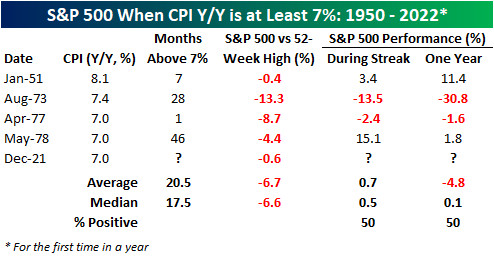 As you can see from the charts below, the S&P 500 has acted differently each time CPI topped 7.0% on a Y/Y basis. In the first half of 1951, it appeared to trade independently of the elevated inflation readings, moving sideways as CPI readings remained elevated. For much of the 1970’s, however, CPI and the S&P 500 tended to move in opposite directions.  Nonetheless, much of the gains experienced in the 70’s were in periods when the rate at which prices were increasing was on the decline. Inflation has typically been considered a negative backdrop of equity prices but a key factor behind that performance is how long-lasting the inflation is.  In the early 1950s, when the elevated level of inflation was short-lived, equities, which were already near 52-week highs, performed fine.  In the 1970s, though, when inflation was more entrenched, the backdrop for equities was negative. Stay on top of market trends by becoming a Bespoke subscriber today.  Click here to view Bespoke’s premium membership options. 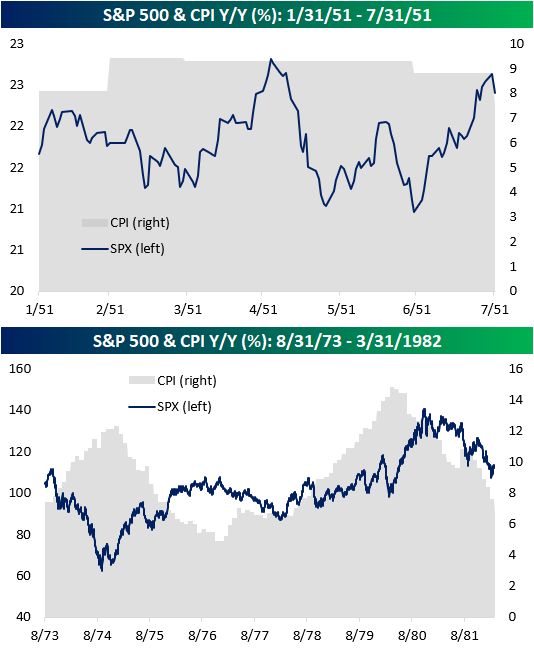