One returning trend that we have made note of recently has been the outperformance of mega-cap stocks on what has generally been moderate broader market breadth.  Online retail giant Amazon.com (AMZN) is a good example of this today.  Even though the S&P 500 is down 0.35% on 3:1 negative breadth as of this writing, AMZN is providing a boost as the index’s top performer up 4.55%. That puts the stock on pace for its best day since November 4th when it gained 6.32%.  While today’s move is notable in its own right as that stands in the 93rd percentile of all daily moves since the stock began trading in 1997, even more impressive is that it marks a breakout to the upside of the past year’s range.  As shown below, since last summer the stock has been rangebound between its lows around $2,870 set in late July—which were then retested in September and March—and the highs around $3,550 first reached in September which was then unsuccessfully tested earlier this spring. 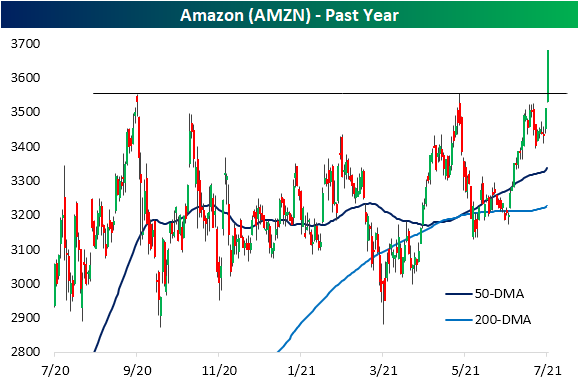 While that range is finally broken, we would note just how tight it had gotten.  With the lower readings from last spring having rolled off, the 52-week intraday high/low spread as of last Friday hit a record low of 23.79%. The breakout to new highs today has lifted that reading up to 28.14% which still does not have another period that can be compared to.  While not as low as today, the only other times that the spread has come close to current levels was early 2020 right before the COVID crash, February 2015, and June 2013.  Click here to view Bespoke’s premium membership options. 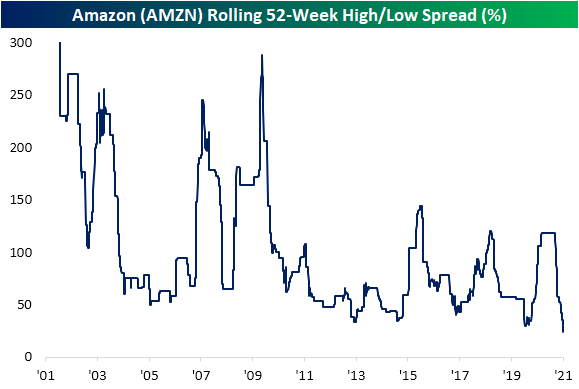