Altria (MO) Gets it Butt Kicked

It hasn’t been a particularly good week for a lot of stocks to this point, but Altria (MO) has been especially hard hit following news that the Biden Administration may issue restrictions on the amount of nicotine that can be contained in cigarettes.  While the stock is off its lows from earlier in the week, it’s still down 9%.  Meanwhile, Philip Morris International (PM), which has no exposure to US tobacco sales and regulation, has risen more than 2% so far this week.

The snapshot of the two stocks from our Trend Analyzer shows the divergent paths of each stock following Monday’s news.  Through Tuesday, while MO dropped below its 50-DMA, PM moved from merely overbought to ‘extreme’ overbought levels.

Over time the stocks of both MO and PM have trended to track each other pretty closely, especially over the last five years.  Therefore, given the short-term disparity in performance between the two stocks, does this week’s sell-off in MO provide an attractive risk/reward trade-off relative to PM? 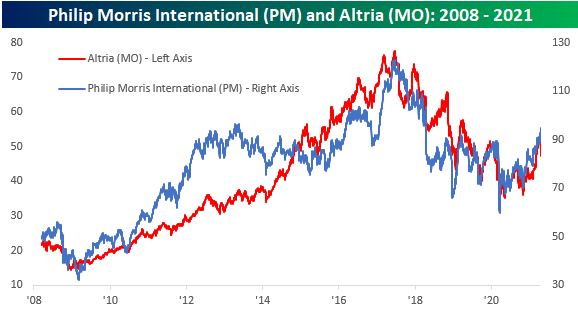 At first glance, that would seem to be the case, but some perspective is on order.  The chart below shows the 50-day performance spread between MO relative to PM going back to 2008.  What’s important to keep in mind is that this week’s move has only narrowed what was previously an extreme performance gap where MO was outperforming PM and MO is still outperforming PM over the last 50 trading days.  In fact, back in late March when the performance gap between the two was over 15 percentage points, it was the fifth widest spread since Philip Morris split up its international and domestic units in 2008.  As bad as a week as its been for MO relative to PM over the last few days, the last few weeks had been just as painful for PM relative to MO. Click here to view Bespoke’s premium membership options for our best research available. 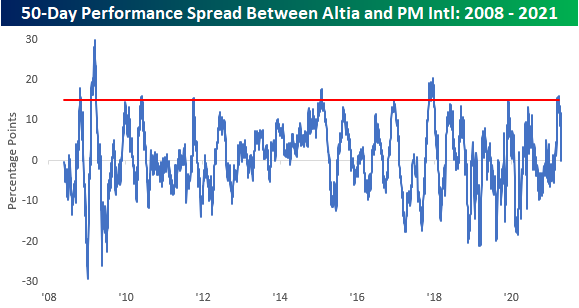