It seems as though any index you look at these days, whether here or around the world, is breaking out to new 52-week highs.  One very large stock that hasn’t been quite able to join in the fun is Alphabet (GOOGL).  While the stock just barely made a new high last week, it quickly pulled back and failed to break out again this week in a second attempt at the $1,300 level.  After a rally of more than 63% from the start of 2017 through the first half of 2018, GOOGL has made multiple unsuccessful attempts at breaking through the $1,300 level for nearly a year and a half now as it digests those prior gains. 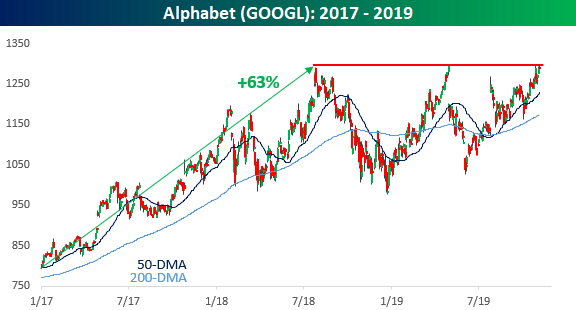 While GOOGL has basically been dead money since the middle of 2018, many of its peers have actually lost money. Remember the FANG+ Index?  Back when the FANG trade was at the peak of its popularity, Wall Street naturally wanted to profit on the theme, but because it’s hard to have an ETF or an index of just four stocks, the NYSE created an index of “FANG-like” stocks consisting of other high growth and highly liquid tech companies.  Besides the four FANG stocks (Facebook, Amazon, Netflix, and Alphabet), this index also included Alibaba (BABA), Apple (AAPL), Baidu (BIDU), Nvidia (NVDA), Tesla (TSLA), and Twitter (TWTR).

Like GOOGL, the FANG+ index also performed very well from the start of 2017 to its peak in the first half of 2018.  While GOOGL rallied 63% during its run, the FANG+ index gained nearly double that at 116%.  With the bigger rally, the FANG+ index has had an even tougher time since that peak in the first half of 2018.  Not only has the index had a hard time taking out its prior high, but it also hasn’t even tested it.  After that peak in June 2018, the FANG+ index declined steadily in the second half of 2018, falling more than 25% and hasn’t even gotten close to its prior highs since.  The only thing we can say positively about the index at this point is that after the most recent leg higher, it’s testing (although it hasn’t yet broken through) its downtrend from the June 2018 highs.  Until FANG+ can at least break through that downtrend, it’s not exactly an index you want to sink our teeth into. Sign up for Bespoke’s “2020” special and get our upcoming Bespoke Report 2020 Market Outlook and Investor Toolkit. 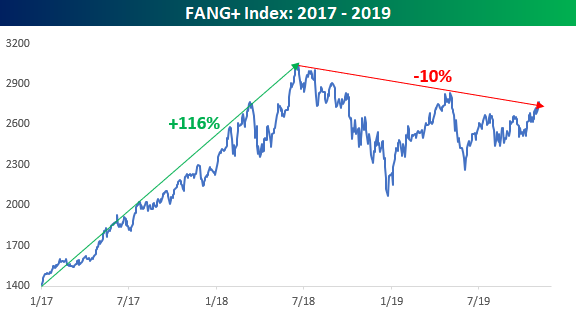