Alphabet and Microsoft Down Headed Into Earnings

Both Microsoft (MSFT) and Alphabet (GOOG) are trading down over 2% heading into their earnings report amidst broader market weakness and wariness towards the tech sector. On a year-to-date basis, MSFT and GOOG are both down over 25% and are trading near their 52-week lows. The charts below show MSFT and GOOG over the last twelve months. On the bright side, the rate of change in the two stocks does appear to have support near current levels. However, they are both still in sustained downtrends.  Click here to learn more about Bespoke’s premium stock market research service. 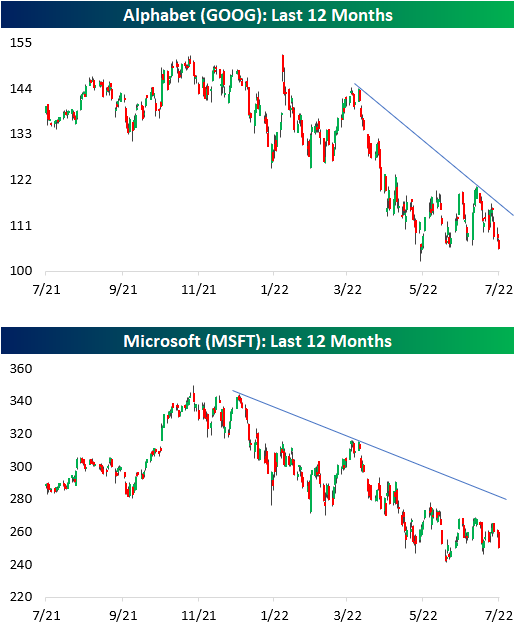 Since GOOG went public in 2004, there have only been four days in which the stock traded lower by two percent or more heading into the earnings report. The latest occurrence was on the day of the Q1 2022 report, which was the only time when it also reacted negatively following the earnings report. On average, the stock has gained 2.5% (median: 2.6%) following the report after trading lower by 2%+ leading into earnings. Historically speaking, GOOG has posted gains on its earnings reaction day 58% of the time, gaining an average of 1.7%. While the average and median returns below are positive, we would note that with just four occurrences the sample size is small. 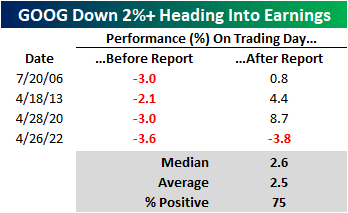 Since October of 2001 (which is as far back as our earnings database goes), MSFT has traded lower by at least two percent in the session heading into an earnings report seven times. Again, the sample size is relatively small, but following every one of these prior occurrences, MSFT gained in the session following its earnings report, booking an average gain of 3.2% (median: 3.5%). For all earnings reports since October of 2001, MSFT has reacted positively to earnings 60% of the time.  Click here to learn more about Bespoke’s premium stock market research service. 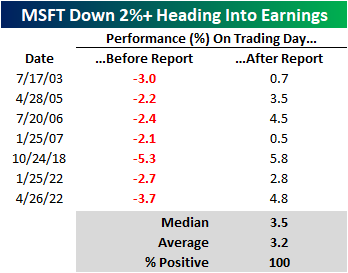