Interest rates have been steadily on the rise ever since last summer as optimism over the economy re-opening and concerns regarding ballooning federal deficits and potential inflation have pushed borrowing costs higher.  In recent weeks, we have seen a bit of a reversal in this trend as the yield on the 10-year US Treasury has dropped from about 1.75% to just over 1.5% even as economic data has continued to come in very strong.  What’s also notable about the recent decline in yields is that on Thursday, the yield on the 10-year actually closed marginally below its 50-day moving average (DMA) for the first time since August 21st. 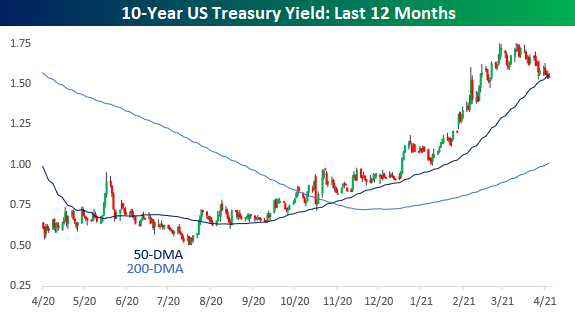 At 166 trading days, the just-ended streak of days where the 10-year yield closed above its 50-DMA was the longest on record going back to at least 1962, eclipsing the prior record of 162 trading days from March 1966.  Also, since 1962, there have only been five other streaks that lasted even 100 trading days with the last occurring all the way back in 1984. 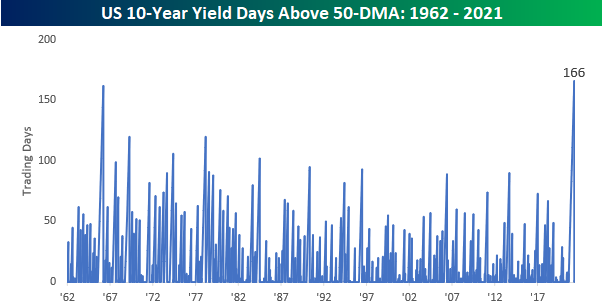 While the 10-year yield just ended a record streak of closes above its 50-DMA, its current streak of closes above the 200-DMA is much more ‘normal’ relative to history.  At 113 trading days, it doesn’t even rank anywhere near the top ten in terms of longest streaks.  With the 200-DMA only barely above 1%, though, that streak isn’t in danger of coming to an end any time soon.  Click here to view Bespoke’s premium membership options for our best research available. 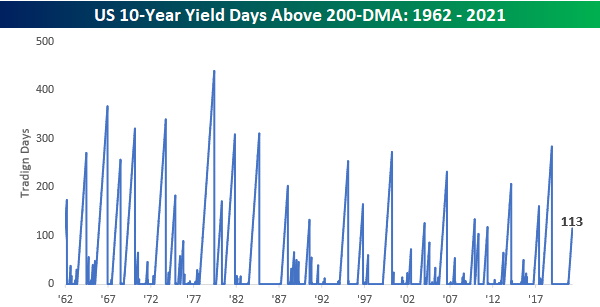