Airports Getting a Little More Crowded

Recent economic data has been making a habit of surprising to the upside as the pace of recovery from the pandemic lows has consistently surprised most economists.  While improved, the picture isn’t perfect.  This morning’s non-farm payrolls report, which was better than expected at the headline level, showed a concerning increase in the number of permanent job losses (people looking for work that left their prior job on an involuntary basis).  Also, looking at more real-time indicators of activity like TSA passenger throughput at the country’s airports appears to have leveled off after rising off the lows in May and June. This begs the question, has the low hanging fruit been fully harvested? 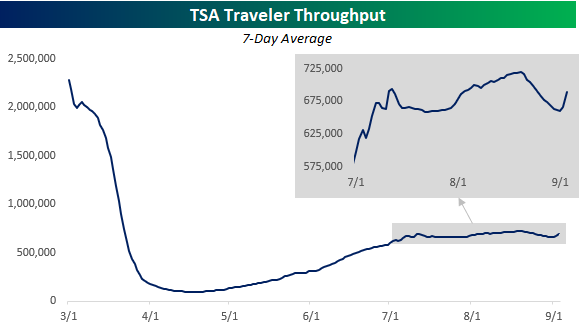 In some ways, the answer to this question is yes.  In March and April, pretty much everything shut down.  As awareness of the virus and how to deal with it grew, though, businesses that were little impacted have resumed operations. While those businesses have resumed activity, there are still a number of businesses such as ones in the travel, leisure, beauty, and hospitality sectors that remain weak in part because the demand hasn’t returned but also because government orders prohibit them from re-opening in full or even at all.  As concerns from the public start to ease and restrictions are lifted, these sectors should also start to improve.

While the pace of the recovery has slowed, it doesn’t yet appear to be rolling over.  Take the passenger data in the chart above.  While it appears to have stalled out in the last two months, part of the decline is the result of seasonal factors.  The chart below takes the same data as the chart above but compares the throughput levels to where they were a year ago and shows the y/y percentage change. On this basis, passenger traffic is still down an eye-popping 67% compared to a year ago, but yesterday’s level was actually the highest reading since late March and has actually been accelerating to the upside.  It’s possible that where Labor Day falls on the calendar this year could be impacting the y/y change, so we’ll have to see where things shake out in the next week, but even with that caveat, the pace of air traffic looks better on a y/y basis than on an absolute basis. Like what you see?  Try out a Bespoke subscription to receive our weekly Bespoke Report in your inbox this evening.  Click here to start a two-week free trial now! 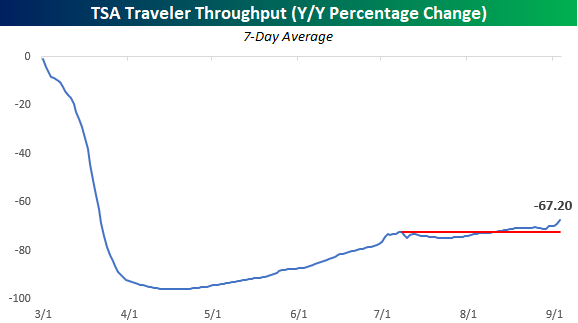