Airlines Out, Video Conferences In

It is no secret that airlines have taken it on the chin just about worse than any other industry during the ongoing pandemic. The nine airlines stocks in the S&P 1500 are down 58.86% on average since the February 19th equity market peak. Whereas the total market cap of these nine stocks stood at well over $100 billion throughout the past year, now it is less than half of that at $44.24 billion. Meanwhile, as consumers adapted to the new economy trading plane rides for video conferences, Zoom Video (ZM) surged over 65% since the 2/19 high. That massive divergence in performance led the company’s market cap to reach $49.29 billion. As of last Wednesday, for the first time the market cap of ZM actually surpassed the total market cap of those nine major airlines as shown in the chart below. But with that comes a very lofty valuation for ZM and deep discount for airlines.  Whereas the average forward price to sales ratio for airlines is at only 0.55, Zoom’s is at 47.72.  Start a two-week free trial to Bespoke Institutional to access our full range of research and interactive tools. 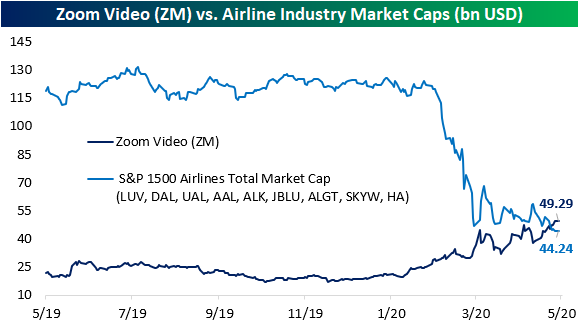