Airline Passenger Traffic Back on the Ascent After a Weird August

After a surge in the first half of the year and into Summer which took the number of daily air passengers back to levels last seen before the pandemic, Americans started to pull back in their air travel from late July through early September.  Much of this decline was likely seasonal in nature, but the rise of the COVID Delta variant likely played a role too, at least at the margin.  After peaking out just shy of 2.1 million passengers per day, the average daily volume of travelers in the nation’s airports fell by nearly 25% through mid-September.  Since that low a month ago, though, volumes have been on the rise, and average daily air passenger traffic over the last seven days is now only down 10% from its July high. 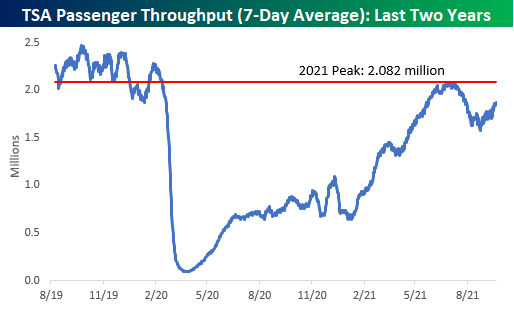 As air passenger traffic has picked up, it’s not surprising that the airline stocks have bounced a bit off their lows in August.  The ETF which tracks the major airlines in the sector (JETs) has rallied more than 10% from its August low.  It was also up as much as 18% earlier this month before crude oil prices topping $80 started to weigh on sentiment in the sector. 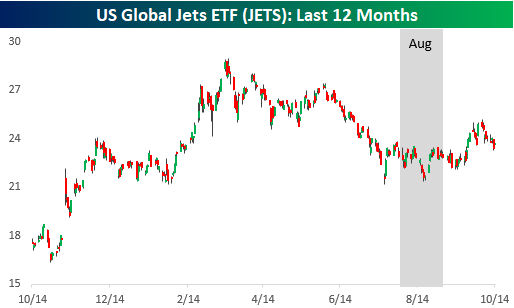 But then came August.  Throughout the entire month of August, there was only one day (8/1) where passenger traffic was up week/week and from there the next 30 days were all lower.  Granted, traffic levels were coming off of post-pandemic highs, but the fact that traffic levels were so steady to the downside implies that Americans just didn’t want to fly.  While most people were sad to see the summer come to an end, thankfully for the country’s airlines, traffic picked up again in September, and October is now on pace to be the second straight month where passenger traffic levels have increased on a week/week basis on at least two-thirds of days.  Click here to view Bespoke’s premium membership options. 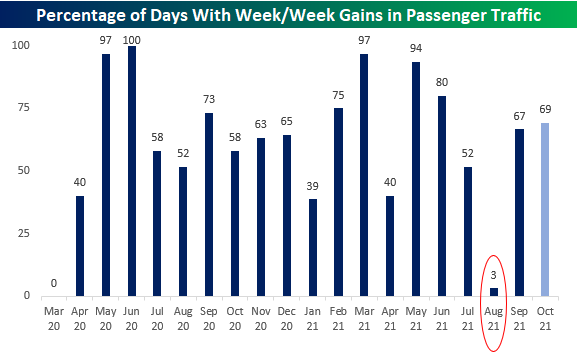