With COVID case counts on the rise throughout the country, you would think that Americans would be a bit more concerned about getting on airplanes.  Rather than hunker down, though, Americans have been increasingly spreading their wings.  The latest passenger throughout numbers released by TSA showed that on Sunday 984,234 passengers went through security checkpoints at US airports.  That was the highest single-day reading since March 16th.  This weekend’s air passenger traffic also helped to push the 7-day average of traffic to new post-COVID highs.  After rising and then falling back down after the Labor Day holiday, air passenger traffic has ‘surged’ in recent days to push the current 7-day average up to 819,384 passengers per day. 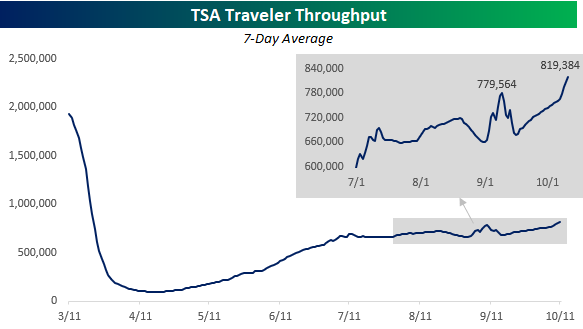 Air travel has been on the rise, but the term surge may be too strong.  When we compare air passenger traffic levels to where they were a year ago, we’re still down over 65% on a 7-day average basis.  Even yesterday’s strong passenger numbers were still down over 61% from their same levels last year.  In other words, there’s still a lot of room for improvement!  The chart below compares the y/y change in passenger throughput to the performance of the Airline ETF (JETS) since the start of the pandemic.  Not surprisingly, there has been a pretty strong correlation between the two as increases in passenger traffic have been accompanied by rallies in the airlines and vice versa.  Click here to view Bespoke’s premium membership options for our best research available. 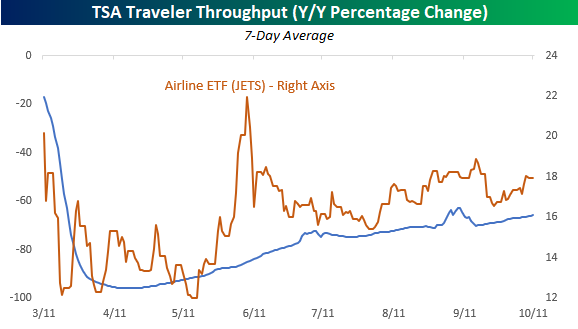