Advanced Micro Surges into a Record Narrow One Year Range

After three straight quarters where the stock has declined in reaction to earnings, shares of Advanced Micro (AMD) are surging over 6% today bring the share price within striking distance of the $100 level.  Despite the stock’s strong reaction to earnings today, what’s perhaps even more notable regarding AMD share’s price is that remains stuck in the range it has traded in for a full year now since spiking higher on earnings last July.  With an intraday peak of $99.23 in January and an intraday low of $72.5 back in May, AMD has traded in a one-year range of 36.9%. 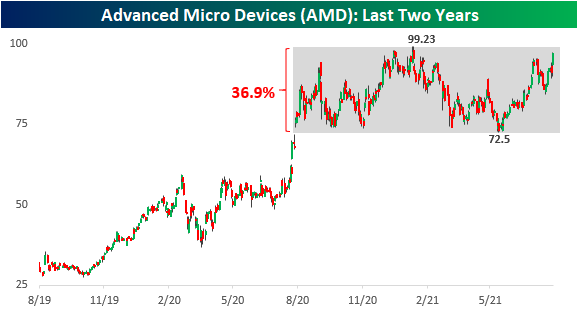 For most stocks, a one-year range of over 35% wouldn’t raise eyebrows.  For a stock like AMD, however, 36.9% is not only narrow but it’s the most narrow in the history of the stock.  Since 1991, the average spread between AMD’s 52-week high and 52-week low has been over 200%, and there are multiple periods where the spread topped 500%.  On the downside, though, prior to the current period, there was never another period where the one-year range was even less than 50% as in 1995, the spread only dropped down as low as 52%.  A one-year range of 36.9% may not exactly be like watching paint dry, but for AMD stockholders, it has been a snoozefest. Click here to view Bespoke’s premium membership options. 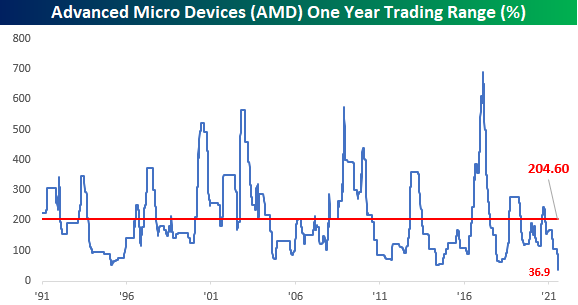