Last week, we highlighted how the recent market declines had struck fear in the hearts of investors as the American Association of Individual Investors (AAII) weekly survey of bullish sentiment dropped to 36.5% – its lowest level since October.  Along with individual investors, another sentiment survey of ‘active managers’ also showed a notable reigning in of bullish sentiment.

The National Association of Active Investment Managers (NAAIM) conducts a weekly survey of its members to see how exposed they currently are to the market, ranging from leveraged long (+200) to leveraged short (-200).  In last week’s survey, overall exposure dropped from 87.8 (nearly fully invested) down to 46.9 – the lowest level since last April! 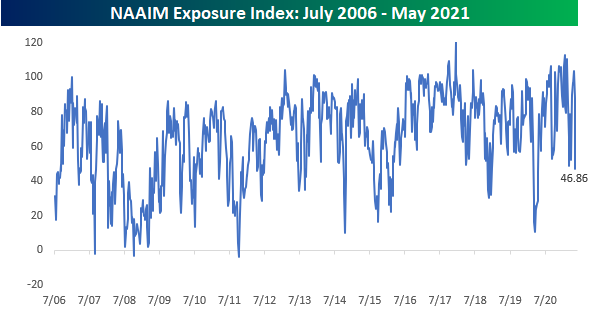 Not only did the NAAIM Exposure Index drop to its lowest level since last April, but the magnitude of the drop was even more significant.  With a w/w decline of nearly 41 points, the NAAIM Exposure Index experienced its largest decline since last September, and before that, 2008!  Up until last week, there was a credible argument that sentiment had become a bit too frothy, but there’s nothing like a market sell-off to get investors back on their toes.  Click here to view Bespoke’s premium membership options for our best research available. 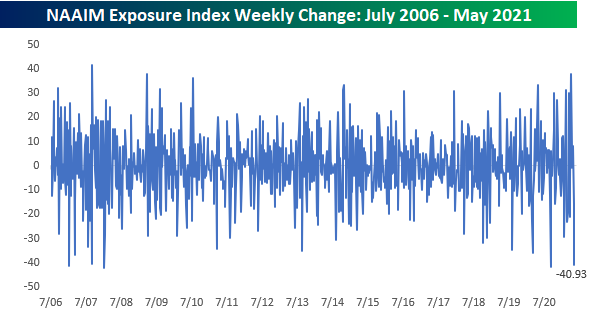