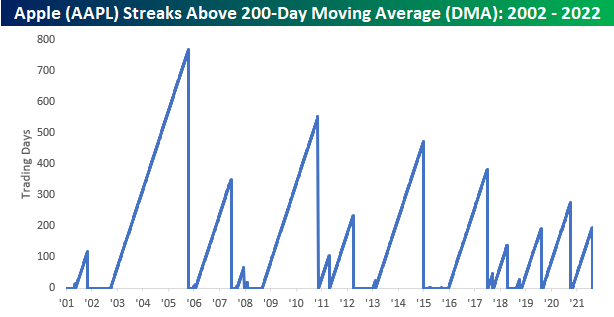 Of the prior streaks shown, AAPL’s median performance in the last six months of the prior streaks was a gain of over 11% with only one period of negative returns.  With a gain of 2.7% over the last six months, if AAPL closes below its 200-DMA in the near future, its performance during this period will rank as the second weakest of the streaks shown.  Once AAPL ends the streak, its short-term performance was weak with median declines of 5.0% and 0.2% over the next week and month, respectively.  In each case, the stock was also down more than half of the time.  For a stock like AAPL which has performed incredibly well over the last 20 years, these short-term returns are well below the historical average of 0.8% and 3.0%, respectively.

Although short-term returns for AAPL after breaking below its 200-DMA were weak, over the following three months, the stock generally got back on track with a median gain of 17.1% and gains more than three-quarters of the time.  That compares to a median gain of 9.3% for all periods since October 2001.  Six-month returns were also slightly better than average on a median basis (19.5% vs 18.5%) although the consistency of positive returns was lower.  Finally, looking out over the next year, shares of AAPL experienced a median gain of 24.0% with positive returns just over 60% of the time.  While 24% is nothing to sneeze at, it’s actually weak when you consider the fact that AAPL’s median one-year return for all periods since 2001 has been a gain of over 40%.  As the individual periods indicate, AAPL’s performance following prior breaks of the 200-DMA has varied widely, but in aggregate, the stock has tended to underperform its historical average in the short term but then show some improvement over the following three to six months.  Click here to try out Bespoke’s premium research service.

As always, investors should use any names listed as a starting point for further research.  None of the information in this report or any opinions expressed constitutes a solicitation of the purchase or sale of any securities or commodities.  This is not personalized advice.  Investors should do their own research and/or work with an investment professional when making portfolio decisions.  Past performance of any investment is not a guarantee of future results.  Bespoke representatives or clients may have positions in securities discussed or mentioned in its published content.