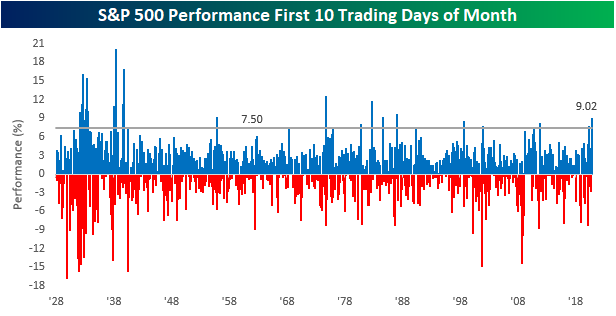 So, when a month starts off strong, does it usually finish that way? Or is there some sort of reversion to the mean?  Unfortunately, prior experience isn’t particularly consistent in one direction of the other.  The table below shows each month since 1928 where the S&P 500 was up at least 7.5% in the first ten trading days of a month.  Overall, the S&P 500’s average rest of month performance has been a gain of 0.96%.  That sounds good, but on a median basis, the rest of the month typically sees a decline of 0.2% with positive returns less than half of the time.

In looking at the chart above and the table below, you’ll notice that most of the strong starts for the S&P came during the Depression in the pre-WWII period.  In 1932 and 1933, for example, there were five occurrences each year!  Looking at the post-WWII period where the frequency of occurrences wasn’t nearly as common, strong starts to a month typically saw a more positive but still not a very consistent trend.  In the ten prior months since the end of WWII, the S&P 500’s average rest of month performance was a gain of 1.27% (median: 1.69%) with gains 60% of the time.  Click here for a free trial and full access to Bespoke’s research and interactive tools. 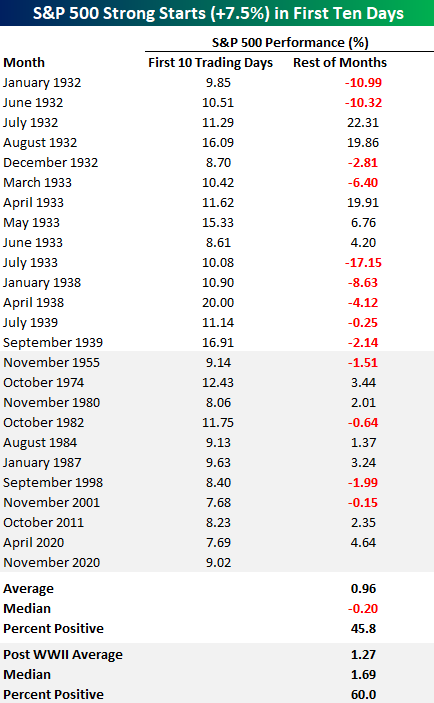