A New Act Or A Small Shift?

A couple of weeks ago in our Equity Market Pros and Cons report, we highlighted the chart below showing the S&P 500 over the past year and the various “acts” of sector rotation in those periods. Overall, the fact that various sectors have been participating at different stages of the rally has been a good sign for breadth. In the most recent act, the leaders have been sectors like Energy, Financials, and Tech which are the three top-performing sectors.  On the other hand, Real Estate, Utilities, and Consumer Staples have been some of the worst-performing sectors. 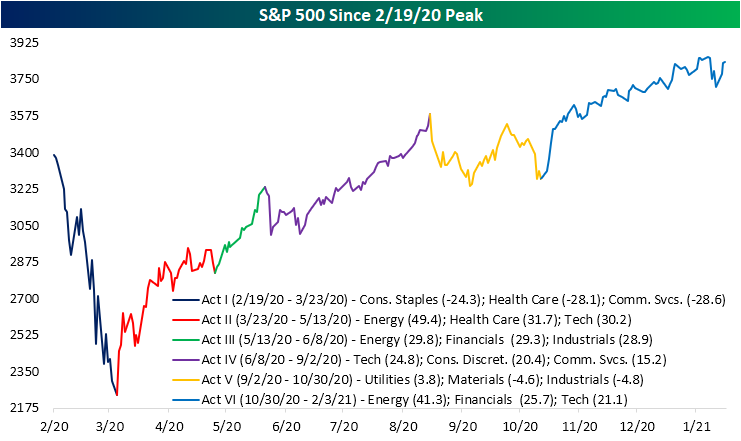 But looking at the relative strength charts of the eleven sectors versus the S&P 500 over the past year, there have been some reversals recently, meaning some of the trends that have been in place over the past few months are turning a corner.  For example, the relative strength lines of Energy and Financials—the two best performing sectors since November—have generally been in uptrends during the current “act” meaning they have outperformed the broader S&P 500. But in the past couple of weeks, the relative strength lines of both Energy and Financials have broken those uptrends. The Industrials sector has seen the same play out while the Materials sector is sitting right at the bottom of its multi-month uptrend.

On the other hand, Technology—which has been the third best performing sector—has seen its relative strength line make a break higher alongside Communication Services.  While a less recent development, Consumer Discretionary has also seen its relative strength line resume its uptrend. Perhaps more interestingly, some defensive sectors like Real Estate and to a lesser degree Utilities have been the laggards of the current act, but have seen their relative strength lines turn higher recently.  For the former, this recent uptick has broken the past year’s downtrend. Granted, the same trends are still very much in place for the other two defensives: Consumer Staples and Health Care.  Click here to view Bespoke’s premium membership options for our best research available.