A Majority of Investors Are Still Bullish

Sentiment continues to run in favor of the bulls though there has been some moderation in the past couple of weeks. Bullish sentiment as measured by the AAII weekly sentiment survey peaked at 56.9% in the second week of April but has since fallen in back-to-back weeks falling 4.2 percentage points to 52.7%. While lower recently, this is the first time since the last two weeks of 2017 and the first week of 2018 that bullish sentiment has remained above 50% for three weeks in a row. Before that, you would have to go back to early 2011 to find another period with bullish sentiment being above 50% for several weeks in a row. Outside of the early 2000s, such readings have been relatively uncommon. 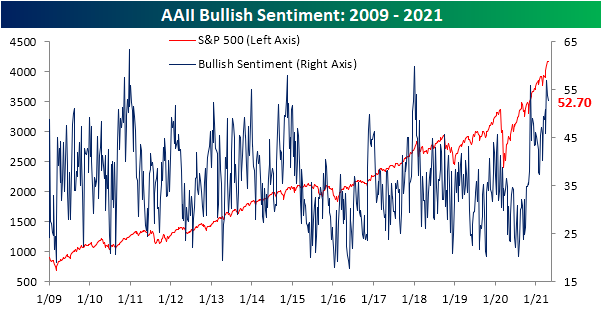 While individual investors have become less bullish over the past couple of weeks, the opposite is true of newsletter writers.  The Investors Intelligence survey of this group has seen bullish sentiment rise for three weeks in a row reaching 63.7% this week.  That is the highest level since at identical reading in the second week of the year. Although it has not been particularly long since the last comparable reading, we would note that it is elevated relative to history.  In the chart below we show bullish sentiment over the past 50 years. Outside of now and late last year, the last time bullish sentiment was as high was in late 2017/early 2018. You would have to go all the way back to February of 1987 or earlier to find another time before that when sentiment was as high as it is now. Additionally, less than 20% of respondents are also looking for a correction. Readings around these levels were not necessarily uncommon in the early 2000s and prior, but relative to the past 15 years or so such a low reading has been rarer. Click here to view Bespoke’s premium membership options for our best research available.