When it comes to media consumption there is a new kid on the block and it has been a popular topic in a number of conference calls this earning season: “Short Format Video”.  Short Format Video, or SFV for short, describes videos that are typically less than two minutes long but are still able to get a message through in an engaging way. Whether you’ve personally get sucked into an endless stream of these videos or watched someone you know do the same, these videos can be extremely addicting.  That might be a big concern for parents and psychologists, but for companies looking to take or keep an even larger share of consumers’ waking (or sleeping) hours in their ecosystems, this is the hot tool they have plowed into to generate even more ad dollars in what many already considered a saturated market.

The SFV trend was brought to the forefront by TikTok’s monster global growth. Since ByteDance (developer of TikTok) is a private Chinese company, its internals are opaque, but due to the company’s legal feud with the Trump administration, it was revealed that as of August 2020, TikTok had 689 million monthly active global users, representing an almost 1200% increase from January of 2018. Additionally, as of December 2020, the app had been downloaded over 2.6 billion times and the company is rumored to have taken in a profit of 3.3 billion dollars for the fiscal year of 2020.

In terms of Google search trends for “TikTok” in the US, outside of some spikes last summer when TikTok was embroiled in its legal dispute with the Trump Administration, search activity has been steadily rising over time, so you may consider SFV a fad, but it has some staying power. With growth and profits like this, is it any surprise that social media companies have been focused on copycatting their way to get a slice of the SFV pie? 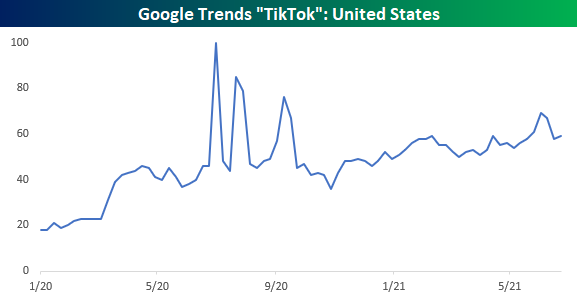 Starting with the most notorious ‘borrower’ of ideas in the social media space, Facebook has been quietly experimenting with how to best insert the SFV alchemy into their social media empire since as far back as 2018 when it created a standalone app called Lasso. Lasso didn’t really go anywhere, but as Facebook wound it down in 2020, it handed the baton over to Instagram’s Reels which was launched in Brazil in late 2019.  From Brazil, Reels slowly expanded to more countries until it was launched globally in August of 2020. As of the Q2 2021 earnings call, Reels was the largest contributor to engagement growth on Instagram.

When Facebook first announced the Reels feature, there was a ton of interest in terms of Google searches.  While much of the initial hype was short-lived, search interest has stayed at a pretty steady state ever since.  It also would make sense that since most people already have Instagram, they didn’t have to search Google to find it. 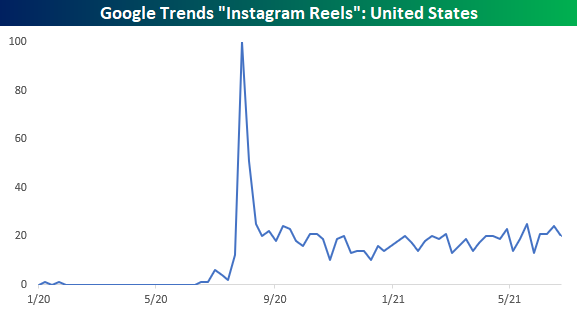 Alphabet has also been increasingly active in the SFV space and despite little emphasis on the new feature, it has seen some success.  YouTube first rolled out the beta version of “YouTube Shorts” on its mobile app in India back in September of 2020.  The US launch followed back in March 2021, and the feature was launched globally this month. So far, YouTube SHorts appears to be a success as Alphabet noted in its Q2 2021 earnings call that YouTube Shorts surpassed 15 billion views on a daily basis.

Search trends also reflect the recent surge in popularity.  While the feature was launched in the US back in September, search interest for the feature started to take off at the start of the year. 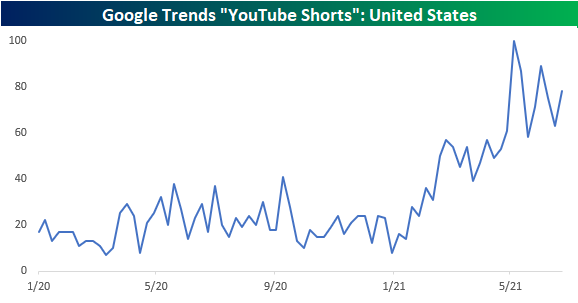 Snap added its Spotlight feature to their app last November.  Spotlight allows users to share short-format videos publicly, and in order to entice users to use the service, Snap promised that it would make daily payouts of $1 million throughout the remainder of 2020 to users whose Snaps made it to the top of this feature. The strategy apparently worked.  In the Q2 2021 earnings call, Snap noted that daily time spent per user on Spotlight increased 60% QoQ, with daily active user growth of 49%, and daily content submissions tripling during the same time!

Search interest in the Spotlight feature for Snap quickly accelerated following its launch late last year right up through the first quarter of 2021 but has tailed off since April.  The decline in search interest, though, doesn’t appear to be affecting adoption of the service, but again, like Reels, given the ubiquity of the app and the age demographic of its users, Google probably wasn’t the first place the Snap demo would go to learn about the Spotlight feature.  Another reason for the decline in search interest could also be tied to the fact that search interest peaked right around the time that Snap reduced the amount it was paying creators to use the feature. 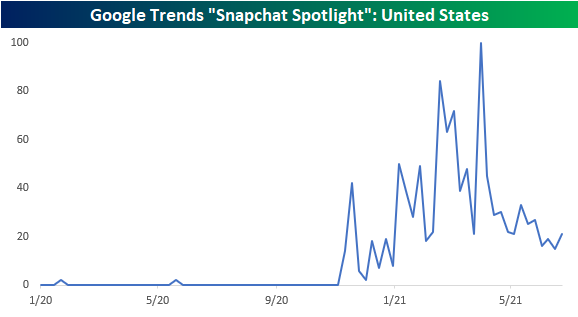 Strangely, TWTR was the first mover in the American space with Vine gaining major success in 2013.  While originally successful, Vine was eventually shut down as the company had trouble monetizing the feature. Twitter tried again last November with its Fleets feature, which included photos and videos but just announced this month that they would wind down that service in August due to a lack of engagement. One potential cause for Fleets not catching on was the fact that unlike all of these other SFV features, Fleets only included content from the user’s network as opposed to an algorithmic push from all global content.

SFV, like most media technologies, experienced a major boost in adoption during the pandemic, but it is interesting to see how quickly the major social media platforms adapted to this. Facebook had been in process of experimenting with SFV when it added a looping video feature in 2013 (in part to compete with Vine), but since 2019 the company had been trying to specifically accrue some of that TikTok shine. This willingness to adapt to new trends and experiment with their implementation is shown in how the company was early to discuss its SFV feature in conference calls as early as Q4 2019. Judging by the number of mentions on conference calls, Snap seems to be the most enthusiastic about its SFV feature, mentioning it more than the others in each of its last three earnings calls and more than any other call in its call earlier this month.  Alphabet, on the other hand, seems to be later to the party, as the company has yet to release a fully complete SFV tool, and yet still experiencing major success simply to their scale.