A Case for the Shorter Trading Day

Since the S&P 500’s last high on September 2nd, despite an average opening gap of around 5 basis points (bps), the index has averaged a 17.7 bps decline from open to close.  Looking at the intraday pattern in that time, the morning through the early afternoon typically sees the index erase any gains from the open. After a small bounce in the mid-afternoon, the final hour has averaged a sharp reversal lower. 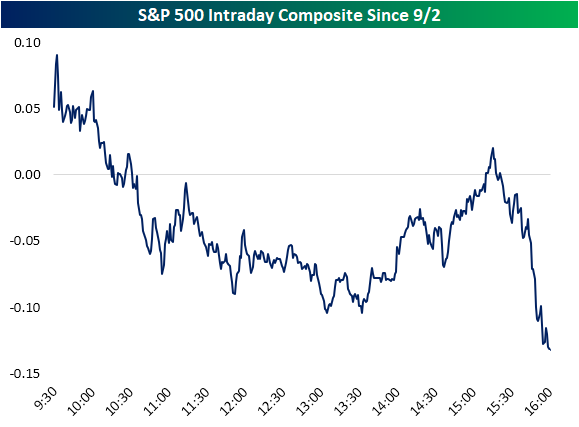 Taking another look at intraday patterns, below we show the cumulative performance in 2021 of $100 through a few hypothetical strategies. The first is buying at the close and selling one hour into the following session (dark blue line).  The next would be buying at the start of the final hour and selling at the close (red line). The third would be holding for the time between 10:00 AM to 3:00 PM (gray line).  The last would be a simple buy and hold from close to close (green line).  As shown, “smart money” is not looking particularly bullish this year.  Had you only owned the S&P in the last hour of the day, your $100 at the start of the year would be down to just over $88.  Meanwhile, owning the opening gap into the first hour only would leave an investor up almost $16.  While you would be holding on for a longer period of time, owning in the middle of the day would have resulted in decent gains, but the best strategy has been to buy and hold. which captures returns both throughout the trading day and outside of regular trading hours.

Not shown in the chart below is if the trading day ended at 3PM instead of 4.  If the equity market simply closed at 3 PM every day (or you sold at 3 PM and bought again at the close), that strategy would be up roughly 30% YTD!  A three o’clock closing bell on the east coast has a nice ring to it!  Click here to view Bespoke’s premium membership options. 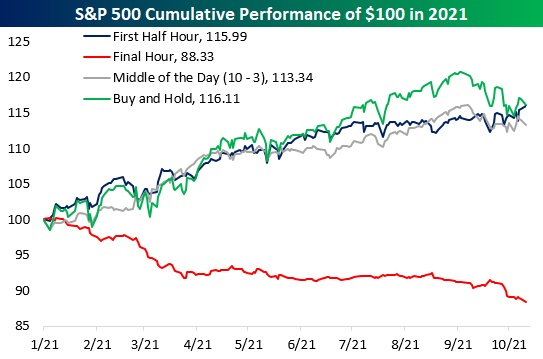