A Better Than Average Decade

The S&P 500 rallied 3.6% on a total-return basis in November, which was the best monthly return for the index since June but surprisingly only the fourth-best month so far in 2019.  That’s how strong equities have been this year!  This November was also the best November for the S&P 500 since 2016 after President Trump was elected.  While the S&P 500 is currently up 27.6% YTD on a total return basis, over the last 12 months, the index is ‘only’ up 16.1%.  That’s how bad last December was!

Longer-term is where the current returns relative to average are really skewed.  Over the last 10 years, the S&P 500’s average annualized return of 13.4% is a full three percentage points higher than average.  That may not sound like an enormous difference, but over time it adds up; 13.4% compounded over 10 years works out to a cumulative gain of 252% whereas 10.4% compounds to just 169%. While 10-year returns are well above their historical average, returns over the last 20 years have been well below average at 6.2% vs 11.0%.  A three percentage point difference adds up over 10 years, but a spread of five percentage points over a 20-year period is enormous.  While one could expect to multiply their original investment by seven times if it compounded at 11% annually over a 20-year period, that same investment wouldn’t even multiply by 2.5 times at a rate of 6.2%! 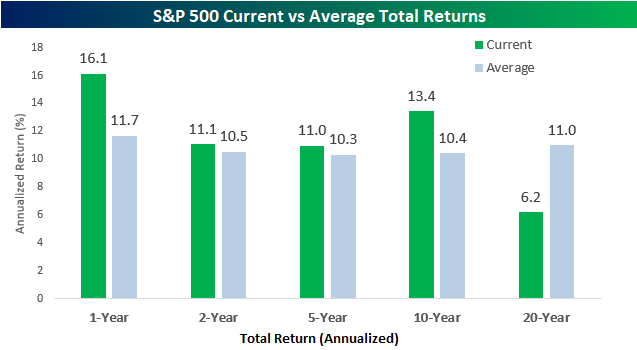 The chart below ranks the S&P 500’s current one, two, five, ten, and twenty-year returns on a percentile basis versus all other periods.  Interestingly, the S&P 500’s current one-year performance only ranks in the 58th percentile relative to all other 12-month periods, and the two and five-year returns are both slightly below the 50th percentile.  The real extreme, though, is in the S&P 500’s 20-year performance which ranks in just the 5th percentile of all other 20-year periods in the index’s history.  As good as the last decade has been for bulls, the decade before was truly treacherous.  Sign up for Bespoke’s “2020” special and get our upcoming Bespoke Report 2020 Market Outlook and Investor Toolkit. 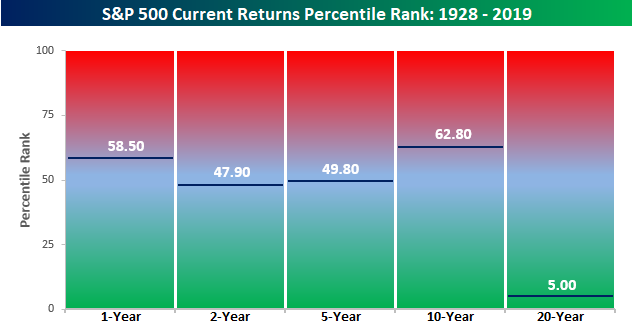