A Banner Year for US Equities

2019 was surely a banner year for US equities.  With a total return of 31.5%, the S&P 500’s gain in 2019 was nearly three times the historical average 12-month return of 11.7%.  That’s strong!  In the chart below we compare the S&P 500’s annualized returns over the last one, two, five, ten, and twenty years to its average annualized returns over those same time frames since 1928.  While the one-year return sticks out like a sore thumb, we would note that the S&P 500’s annualized returns over the last two, three, and ten years are also above average.  Almost as notable as the fact that the one year return has been so much stronger than average is that the S&P 500’s two-year return is less than two percentage points above its historical average.  That just shows how bad 2018 was!  Looking further out, the only time frame where returns are below average is over the last twenty years where the 6.1% annualized gain is almost five percentage points below the historical average. Over a full twenty years, that’s a difference of tripling your investment versus making eight times your investment! 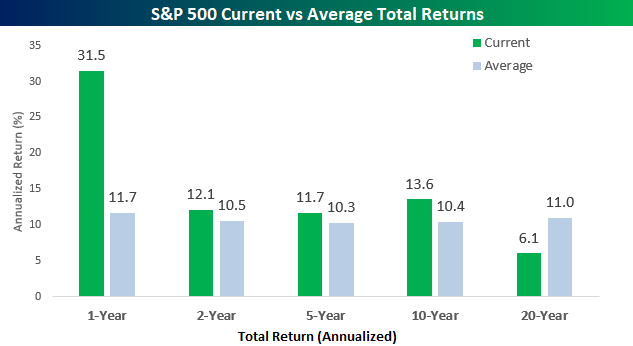 The chart below compares how current returns during the above time frames rank on a percentile basis relative to all other periods.  The S&P 500’s one-year return ranks in the 85th percentile which is pretty extreme.  For the two, five, and ten year periods, though, current returns are much more middle of the road.  Conversely, as stretched as extreme to the upside that the one-year return is relative to all other periods, the twenty-year return is even more depressed to the downside.  At just 4.6, more than 95% of all other 20-year periods have been better than the last 20. 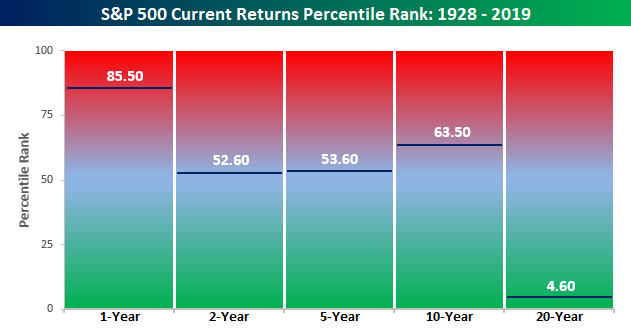 Finally, as mentioned above the last year has certainly been a strong one, and it follows a year where returns had been abnormally poor.  The chart below shows the rolling 12-month total return for the S&P 500 going back to 1990.  The gain of 31.49% over the last year was the strongest for the S&P 500 in six years coming up just shy of the 32.39% gain in 2013.  Last year at this time, though, the S&P 500 was down over 4% on a total return basis in the prior 12 months.  Start a two-week free trial to Bespoke Institutional to access our full suite of research tools and analysis.