While the yield on the 30-year Treasury bond briefly rose above 2% overnight for the first time in a year, in general, long-dated government yields are lower today. As such, the iShares 20+ Year Treasury Bond ETF (TLT) is bouncing from extreme oversold territory today rising over 0.6%. Even after today’s rally, though, TLT continues to trade well below its 50-DMA as it has for 51 consecutive trading days. 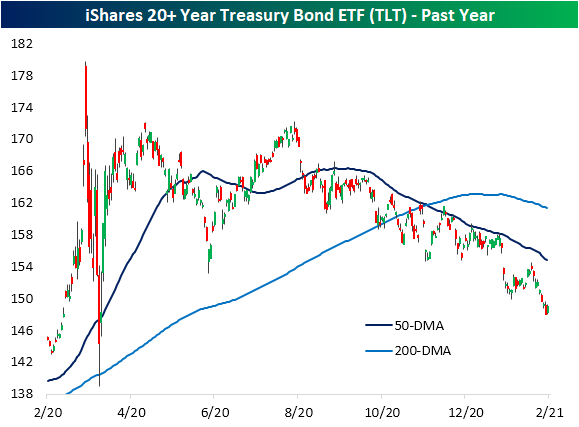 The current streak of consecutive closes below the 50-DMA for TLT has now joined a list of 13 prior streaks of at least 50 trading days long. The two longest of these went on for 93 consecutive trading days ending in February of 2011 and September of 2013.  While the current streak has plenty of time to go to even tie those records, the last streak was very recent ending on November 19th of last year at 63 trading days long. In fact, between the end of that streak and the start of the current streak, there were only two days. In other words, since August 24th, there have only been two days in which TLT did not close below its 50-DMA. Not only that but with TLT currently trading more than 4% below its 50-DMA, the streak isn’t likely to end any time soon. 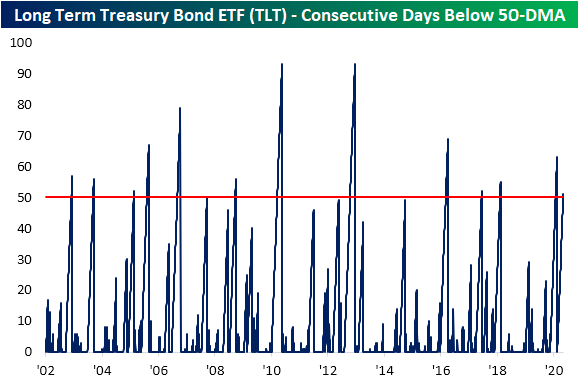 In the table below, we show each of the past TLT streaks when they first reached 50 trading days long.  For each streak, we also show how TLT and SPY performed going forward. On average TLT has continued to drift lower over the following month, but three months to one year out, performance is generally much more positive.  Returns have been positive better than two-thirds of the time three and six months out with average gains of 1.81% and 5.75%, respectively.  One year later, TLT has traded higher all but once (in November of 2005 when it only fell 8 bps). As for equities, the S&P 500 (SPY) is similarly weak one week after these streaks averaging a decline of 0.46% with positive performance less than a quarter of the time. Again, returns further out are generally more positive with SPY higher 83% of the time 6 months later and 75% one year later.  Click here to view Bespoke’s premium membership options for our best research available. 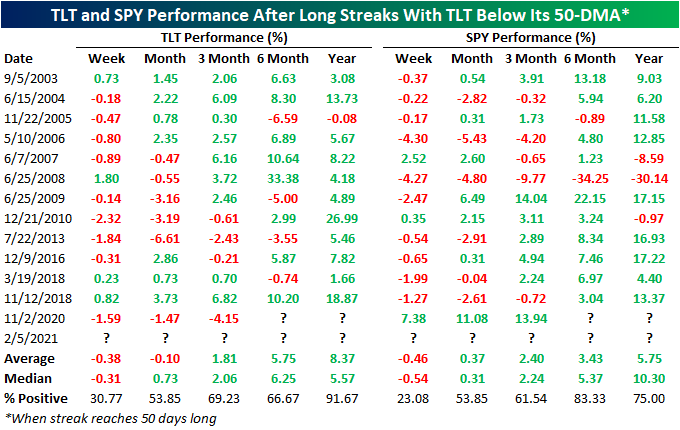