The S&P 500 is lower again today and dropping back below its 200-DMA as of this writing.  After rallying over 11% in the second half of March, the S&P 500’s current leg lower has brought it down roughly 3.4% from the March 29th closing high.  As for which stocks have done the best and worst during the recent leg lower, it has more or less been a story of rotation from earlier this year.  To get a gauge on this, in the charts below, we took a look at the performance of S&P 500 stocks since the recent peak in late March based on their performance during the two legs lower (1/3 through 1/27 and 2/9 through 3/8) as well as during the two rebounds off those lows (1/27 through 2/9 and 3/8 through 3/29).

We go through the charts in a little more detail below, but the short of it is that since the recent high in the final days of March, the worst performing stocks have been the same names that were the weakest during the prior two legs lower this year.  Conversely, the stocks that have outperformed recently have been the same ones that were the worst performers during the two rallies in late January/early February and during March. Click here to view Bespoke’s premium membership options.

The two charts below show the performance of S&P 500 stocks since 3/29 grouped into deciles based on how they performed during selloffs from 1/3 to 1/27 (top chart) and from 2/9 to 3/8 (bottom chart).  In the case of both charts, the general trend has been that stocks that performed the worst during each of the prior sell-off this year have also been the worst performers over the last week or so since the close on 3/29, while the stocks holding up the best are the same ones that outperformed during those declines. 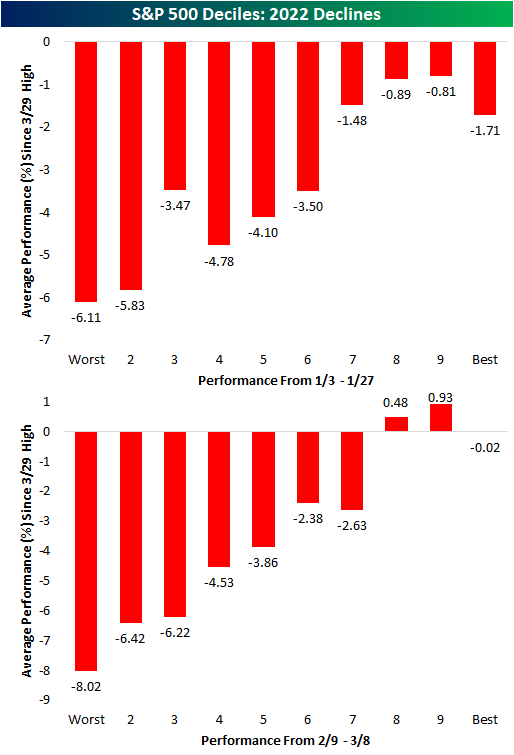 Similar to the analysis above, the two charts below show the performance of S&P 500 stocks since 3/29 grouped into deciles based on how they performed in the rallies from 1/27 to 2/9 (top chart) and from 3/8 to 3/29 (bottom chart).  In this case, the general trend has been that stocks that performed the best during each of the rallies this year have been the worst performers since the close on 3/29, while the stocks that underperformed the most in the two rallies have sold off the least during this most recent decline. 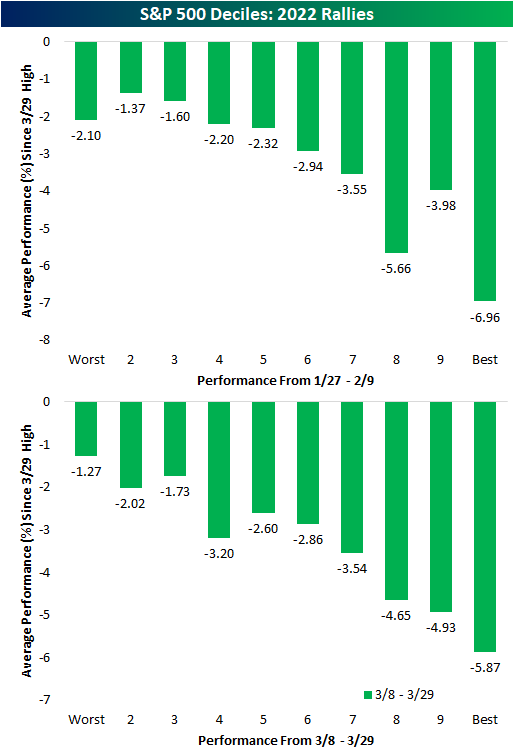