Betting markets sites like Election Betting Odds and poll aggregators like FiveThirtyEight or The Economist are all diligently predicting who wins the 2020 election, but almost as interesting to watch is voter participation. We won’t be doing any forecasting on election outcomes in this post; there are lots of arguments both ways about which candidate or party might benefit from changes in overall voter turnout, and we’re not equipped to answer them. But we do feel like 2020 being a very strong turnout year is a safe bet.

So far, over 17 million voters have already cast their ballots among the 36 states reporting early vote and/or mail-in ballot tallies per U.S. Elections Project. Patterns of early voting activity vary widely across states thanks to different rules and timelines for mail-in or early voting. Of the 36 states for which data exists, four have ballots cast at less than 5% of 2016 levels. In contrast, Vermont has already seen more than a third of 2016 votes cast submitted early. Texas, which has limited mail voting and is just two days into early voting, has already seen nearly 20% of 2016 votes cast. California’s mail-heavy system is above 10%.

So is that an unusual number of pre-election votes cast? In a word, yes. Data from TargetSmart, a Democratic Party-aligned analytics firm, shows total early voting is running at a pace roughly six times what it did in recent Presidential years. Of course, the COVID-19 pandemic is driving more folks to mail their votes in, so maybe the huge numbers of early and mail-in voters aren’t showing an actual turnout surge. But other leading indicators do support the idea that 2020 will see strong participation.

One example is midterm participation from 2018. The last midterm election saw the highest voter turnout since 1970 per the U.S. Elections Project. Historically, prior midterm turnout isn’t a great indicator for Presidential year turnout, but there is some co-movement. 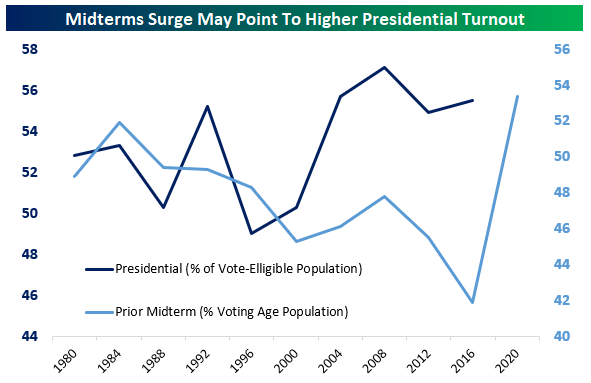 A better example is Gallup surveys asking people how enthusiastic they feel about upcoming elections versus past elections. As shown in the chart below, the spread between the two tends to be a pretty good predictor of overall turnout in Presidential elections since 1996; the only major departure was 2016, when the Gallup measure substantially undershot overall turnout. This makes a very compelling case that Americans are set to vote in relatively large numbers. 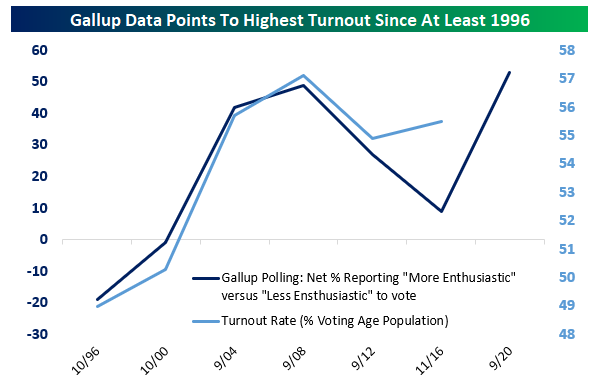 If the Gallup numbers are correct, and the early vote numbers are certainly consistent with them, then this would be the highest turnout year since 60.7% of Americans voted in the 1968 election of Richard Nixon (Republican), higher even than the 2008 election of Barack Obama (Democrat). Stay on top of major election trends and their impact on the financial markets with a Bespoke.  Click here to view Bespoke’s premium membership options for our best research available. 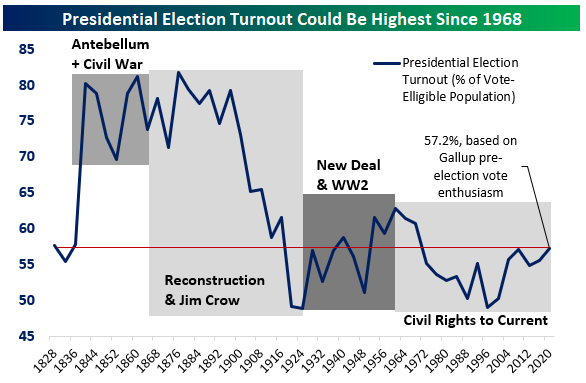