2%+ Starts to a Quarter: A Baker’s Dozen

It’s nice to see stocks rally for a change, but does a strong start to a quarter imply anything about the rest of the quarter ahead?  The table below lists the 12 prior quarters where the S&P 500 rallied more than 2% on the first day of a quarter.  For each occurrence, we also show how the S&P 500 performed for the remainder of the quarter.  Of the twelve different 2%+ rallies highlighted, the S&P 500 rallied an average of an additional 2.1% (median: 2.5%) for the rest of the quarter with gains two-thirds of the time.  Of those twelve different occurrences, though, the range of returns varied widely with the best rest-of-quarter performance being a gain of 18.7% (Q1 1975) while the largest rest-of-quarter decline was 14.4% in Q1 2009.  At the bottom of the table, we also show the average ‘rest of quarter’ returns after the first day of trading for all quarters since 1953.  With an average gain of 2.0% (median: 2.7%) and gains 66.5%, the returns are nearly the same as returns following strong starts to the quarter.  In other words, based on the results following the 12 prior occurrences, a strong start to the quarter tells you very little about the rest of the quarter’s performance. Click here to learn more about Bespoke’s premium stock market research service. 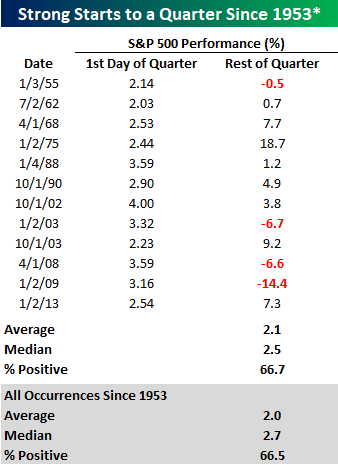